COVID-19
Currently we are operating our business as normally as possible. All items marked "in stock" will be dispatched as soon as possible. UK orders are being fulfilled normally.
There may be some delays / restrictions on overseas deliveries.
- more info
Country:
+44 (0)1438 880 758 Mon-Fri (9.30am-5.00pm)
Home Pens Pens by Brand Visconti Pens Sepia Brown Bottled Fountain Pen Ink
Visconti Pens 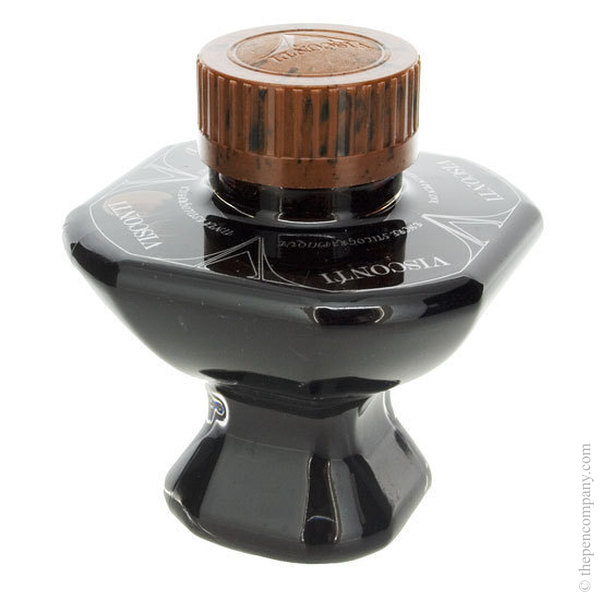 2 reviews
|
Ask a question
$12.95
/
£10.33
Ink Colour:
Sepia Brown
In stock
Available Now
Delivery International delivery is calculated as items are added to the cart
Essential info
Reviews (2)
Ask a question
A tip about filling your pens with Visconti
By Jeff Pearson
|
23rd December 2017
I have five different Visconti inks, and use them all in rotation. They are dry writing inks, (but not as dry as say, Pelikan 4001), and I use these inks to tame some of my 'gushy' wet fine and extra fine nibs. Each bottle comes sitting on its own plinth, and has a clear plastic cover that fits over the bottle and plinth, making for easy storage. Visconti is one of the few inks I own that actually exhibit shading through an extra fine nib. The Pen Company response to the instability of the bottle is spot on, and mirrors my own first bottle of Visconti Burgundy, which, distracted by my dog as I drew the pen nib out of the bottle, led to it toppling over and losing half the bottle onto the microfibre cloth on my desk. Cut to five years later, and I visited a small pen shop in Ypres, Belgium. They were having a promotion of Visconti Pens and inks, and they offered me a try of any ink I fancied. I chose the blue black, and the lady took up the encased bottle, removed the plastic cover, turned the cover upside down and placed the bottle inside it. It fits very securely, she then took off the cap... and the rest is history. Apparently this is how you should use the clear cover and bottle in unison for safe filling, but Visconti don't pass that on. Never a drop spilt since...hope this helps. JP
Good service but so-so product
By first time customer
|
10th June 2014
Ordered this bottle from the website and it came promptly and was well packed. It is a plastic bottle and feels quite cheap so I was a bit disappointed for the money. I had hoped to have a nice bottle which I could reuse in the future but never mind. Also the design doesn't really work because the bottle falls over very easily so it would only be a matter time before I spilt ink everywhere unless very careful. I would order from pencompany again though