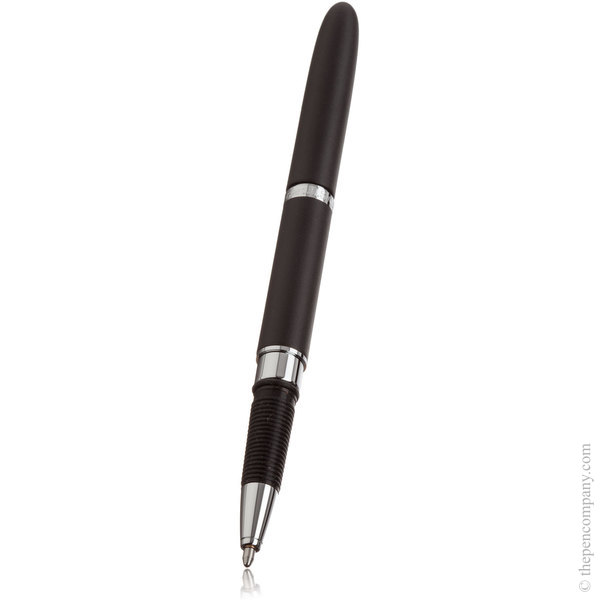 $6.10
Refill
Fisher Space Pen
Essential info
Description
Reviews (2)
Questions (1)
The best Stylus I have ever used!
By Simes 2506
|
23rd September 2013
A quality product! Not only is this Fisher Space Pen a very high quality ballpen (as you'd expect from Fisher!) but the Stylus included on the reverse end is by far the best I've used. Makes using my iPad a real pleasure - as easy and precise as writing with a quality pen on paper I am looking after this one very carefully... but if I do have the misfortune to lose it - I'll be straight back to replace it! Would definitely recommend the additional 'Fisher Space Pen Clip for Bullet Space Pens' which once clipped on, fits so perfectly it feels as if it were put together in the original construction process in the Fisher factory!
A good pen maketh a good author
By Morgen Bailey
|
9th May 2013
The pen comes in a pass-the-parcel-get-anywhere-in-perfect-condition packaging and I remember a while back reading that packaging is the number one bugbear in a reader’s poll so I tested that out too. One end was tough to open (the sort that has cuts into the ends with a middle flap into the end of the box) so I tried the other and it opened quite easily. Part 1 passed. Part 2: the inner case. Solid, durable black plastic with ‘fisher SPACEPEN®’ in silver lettering (and what looks like a single-ring Saturn – astronomers will probably correct me here) on the top. The opening is a click-shut-push-the-bottom-in snug fit. The pen rests on a silver velveteen-style (pen experts – James? – will know the word for it) hollow plastic mould which is super-snug. No chance of this baby escaping. Removing (easier said than done) the grey moulded tray reveals a pamphlet with Paul C Fisher’s picture and signature on the front. Opening that up, concertina-style, reveals on one side the History of the Company (more about that on http://en.wikipedia.org/wiki/Paul_C._Fisher) in English, German, Spanish, Italian and French (I can converse, just about, in all but Italian, so some bedtime reading perhaps). Then on the other side, in the same languages, is headed ‘Technology’ – that’s me! – - Ultra-hard tungsten carbide ball - Stainless steel precision-machined socket prevent leaks and oozing, yet delivers instant uniform in ink flow. - Visco-elastic thixotropic ink in the hermetically-sealed and pressurised cartridge writes three times longer. - Sliding float separates ink from pressurised gas. - Gas plug seals in almost 50psi when full. I only understand about half of that but it sounds impressive. I recognise psi from tyres so perhaps the car mechanics reading this can explain that bit to me. There is actually an explanation on the leaflet and picking up that it won’t run out for at least 100 years (depending upon how much I write!) and I can use it in temperatures from -30oF to +250oF (no danger there). Part 3: the important bit – the pen. The first thing that surprised me about the pen (or rather the pen via the packaging) was how small it is. I thought that perhaps it came in two pieces but no, sure enough, it is dinky. Housed in a shiny silver metallic casing, it opens smoothly, has the stress-ball-type-feel stylus on the top, so no switching of refills etc. and I played WordDrop (on my iPad2) with it seamlessly. The pen itself is reassuringly weighty and the cap fits neatly on to its rear end (ooh er missus). When the cap it replaced, it does so with a nostalgic Rice Krispies Snap, Crackle and Pop “pop”. The pen, when in use, fits comfortably in the fingers, made all the more so by a soft black rubber ribbed (minds out the gutter please!) inch-wide band just back from the tapered pen end. The refill is accessed by a smooth central screw-thread fitting. Everything about the pen is solid and firm, a feel of quality. The pen’s catchphrase is ‘Goes anywhere, writes everywhere’ and it certainly will be going everywhere with me… including off to my writing group in about… oops, minus three minutes. Finally, why is it called the Space Pen? Because NASA have approved it and if it’s good enough for them… :)
By helen shearer
|
30th September 2013
can I get the bullet pen engraved?
Yes, these pens can be engraved - most high street "shoe bars" will do this for you. The pens are made of brass meaning once engraved the lettering will show up in a gold colour giving a nice contrast.