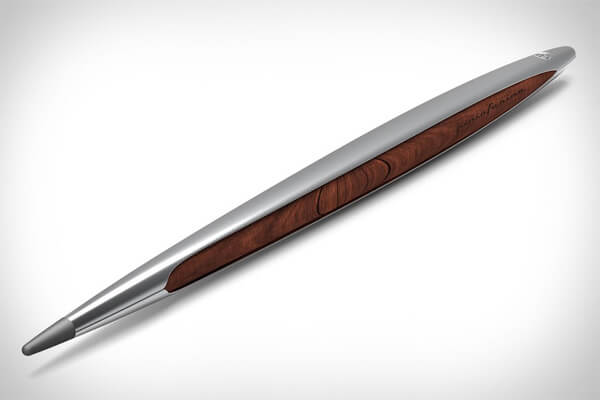 It has been the dream of many aspiring writers, of a pen that never runs out of ink. Well, if you have ever dreamt this fantasy yourself, the good news is that this is now a reality.

Car design company Pininfarina have this month unveiled at the global stationery trade fair Paperworld in Frankfurt, a pen that does not run out of ‘ink’.

The pen, which as you can see, is hopelessly stylish and features an inkless tip made out of a metal alloy called ‘ethergraph’ that writes, and never runs out of material.

Though this sounds like something totally obscene, a similar pen was actually released in 2010 by Vat19.

The description of the Vat19 read:

“As you write, tiny amounts of this metal are deposited onto the page. The silvery markings may resemble pencil, but they are permanent and smudge-proof.”

Each Pininfarina pen shall be supplied with a notebook made of ‘stone paper’, which is pleasingly eco friendly, water resistant and durable – which is what you get when you have paper made from powdered stone.

Though there is not yet a price for this miraculous invention, it should be hitting shelves within the next few months.

Also like something out of a science fiction novel or film, for just $99.99, you can also buy a pen that writes in 3D.

By using ABS plastic (the same material used by many 3D printers), users are able to draw either on the air or on surfaces. By simply plugging the pen into a power socket, you can draw anything within a matter of minutes.

Heating the plastic within the body of the pen, the ink is then extruded by movement, which then quickly solidifies into a strong and stable structure as ‘written’ by the user.

You can of course draw basic shapes and objects, users are also able to draw things of use such as:

Though it does sound terrifically fun, it is important to remember that the 3Doodler is not a toy, as the metal tip of the pen can get as hot as 270C while in use.

Take a look at the video below to see just what you can do with a 3Doodler: