Although some would assume that the amazing world of pens has reached its peak in terms of advancement, thanks to the internet, here at The Pen Company we are seeing miraculous new technologies on what seems like a regular basis.

The newest of course, is the 3D pen by British Company LIX, who in less than 24 hours, managed to raise just over half a million dollars, making it one of Kickstarter’s amazing success stories.

Some of course, may consider the concept of a 3D pen to be a little quaint, but the truth is that it is not the first, as back in January, WobbleWorks announced the availability of its 3D Doodler, which also managed to raise hundreds of thousands of dollars within a very short space of time.

Otherwise known as ‘the world’s smallest 3D printing pen’, the pen, which had an original target of just £30,000, works by both melting and cooling plastic through the nib, allowing the user to ‘draw’ freestanding structures in 3D form. Though some would assume that it would take a lot of electricity to power the pen, the truth is that it uses a USB 3.0 port, meaning that it can be taken and used pretty much anywhere.

What sets the LIX pen apart from the Doodler, at least from the demonstration video, is that it looks a whole lot smoother, more fluid and far more versatile than its American counterpart.

For instance, in the Doodler video, we see people making basic shapes and gimmicky structures such as the Eiffel Tower, whereas LIX focus on the potential of the pen from a far more artistic viewpoint, which may well be the reason that it has done so well in such a short amount of time.

If you want a pen yourself, you can get hold of one by pledging as little as £43 for an early edition of the pen, alongside one bag of mixed colour plastic.

Of course, if you really want to, you can donate as much as £2,425,  and you will be invited to a special dinner with the partners of LIX, of which one backer has successfully bid.

LIX isn’t the only 3D printing project to have sailed past its target recently however, as Micro the homely 3D printer recently found itself with more than $3 million in pledges after offering to bring 3D printing to the masses.

For those who want a Micro in their home, a bid of $199 or more can secure a printer. Like the LIX pen, the highest pledge is astronomical, as $10,000 backed can get a person a printer, a tour around the offices of Micro and a slap up meal to follow. 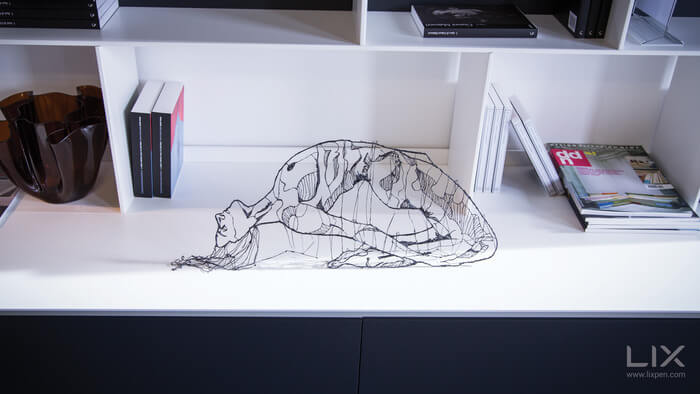 Smart Pen Sends Notes You Write on Any Surface To Your Phone or Laptop
Imagine being able to write invisibly on any surface, and…

Top 5 travel destinations for true stationery addicts
When it comes to weekends or weeks away, I personally…
Categories
Visit our shop
Archives