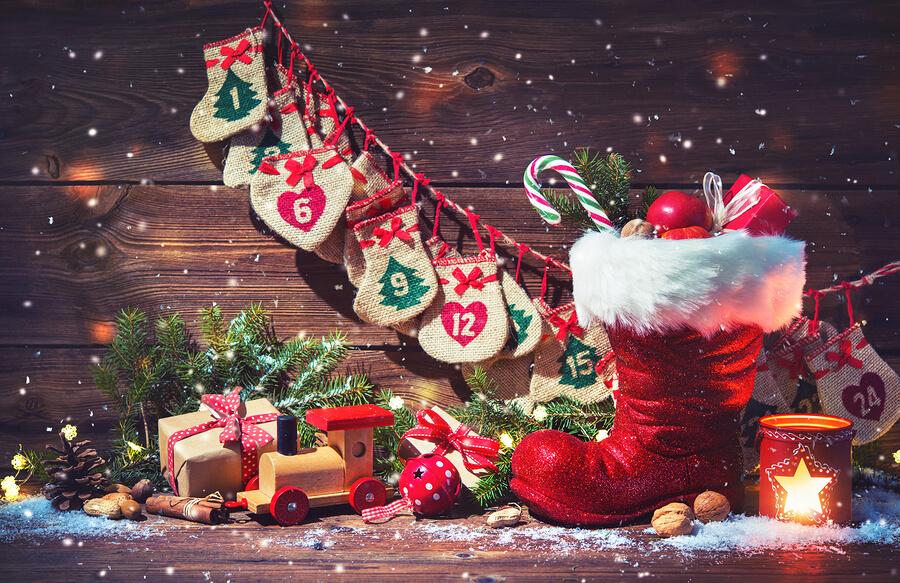 We all know words such as “snowball”, “mistletoe” and “carols”, but what about “rumball”, “bubbly-jock” and “kissing bough”? There are some wonderful wintry words from the past which have fallen out of common use. Learn about them here, and why not try bringing them back with your friends and family this Christmastime!

A kissing bough was hung from the ceiling in Tudor homes, often above the front door, and was a round ball of twigs and greenery, decorated with seasonal fruit. Often containing mistletoe, the kissing bough was the precursor to the bunch of mistletoe we now hang in our homes, under which it is custom to kiss.

A yulestarn was the word for a noticeably bright star in the sky on Christmas night.

In the Middle Ages and onwards, waits were a group of musicians and singers that each town and city across the UK had. These groups would wake the townspeople in winter with singing, and would welcome Royal visitors to the area.

Waits were abolished in 1835, but later the term came to mean people who went door-to-door singing for money – in other words, what we now know as carol singers.

Yuleshard was a term that referred to someone who received no new clothing for Christmas, at a time when new clothing would have signified wealth.

The term ‘rumball’ has had several meanings. An old 18th century term for Christmas Eve, rumball was also the name of the feast served up on that day, and the name of a delicious confectionary treat made from sweet mince.

A bubbly-jock is an old Scottish term for a male turkey.

A bummock was a Scottish term for a large quantity of alcohol being purposely brewed for a special occasion – often Christmas. In the 18th century, bummock or bummack also referred to a party held for tenants by their landlords during the festive period.

Do you know of any more old local or national words relating to Christmas that aren’t in use anymore? Let us know in the comments below.

Journal prompts for Christmas
It’s the most wonderful time of year! It’s also an…

Nostalgia at Christmas – bring back those magic memories
According to a survey carried out by research agency, Voxburner,…