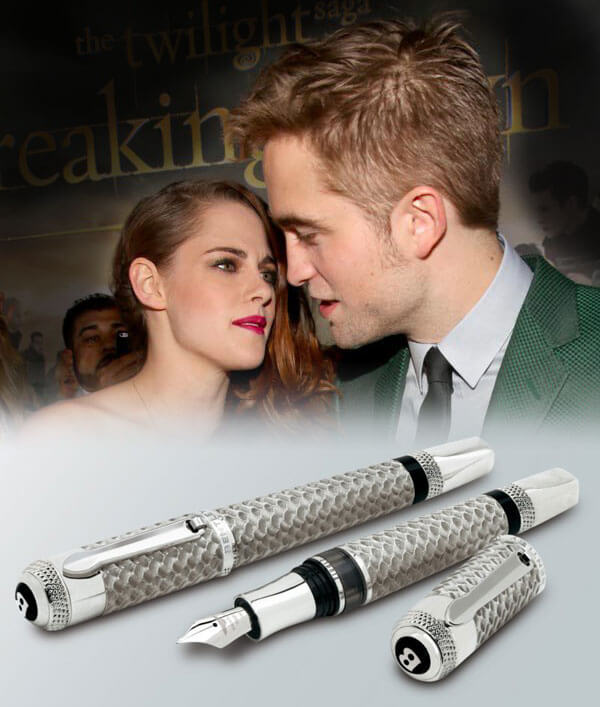 It has been reported that British actor Robert Pattinson, has splashed out on a limited edition Tibaldi for Bentley Crewe fountain pen.

The solid white gold pen is one of a limited edition of 40 worldwide, Pattinson bought the fountain pen for girlfriend Kristen Stewart’s 23rd birthday. Stewart is reported to be an avid pen collector, with a substantial collection.

Pattinson, presented the pen as a gift over the easter weekend when the pair were celebrating Kristen’s birthday together. It remains to be seen if this gift will smooth over the tempestuous relationship between the two.

We often get ask by our customers: who buys pens this expensive? At least this may go part way to answer that question!

It has been widely reported the that pen was bought for £30,000, however, it looks as if Pattinson may have been over-charged as the UK list price is ‘only’ £20,430!  The ‘Crewe’ is also available with a more modest Stirling Sliver barrel for £4,500.

The Bentley Crewe is manufactured by Tibaldi in Italy and is co-designed with Bentley’s head designer Robin Page.  The pens are hallmarked at the Sheffield Assay Office in England. The patterning on the barrel is designed to mimic the ‘engine turning’ technique used to decorate early Bentley cars, whilst the cap and the barrel end feature the same knurling detail used on the dials and gear leaver of modern Bentley cars.

The pen was launched to Celebrate Bentley’s Diamond jubilee  in 2006.

A review of Staedtler’s Pigment Liners
As a fan of both writing and (amateur) drawing, it…