Today: a comparison of different Tombow erasers – the Tombow Mono Zero, available either with a 2.3 mm round tip or broad 2.5 mm * 5 mm rectangular tip, and the Tombow Mono One, an eraser that looks as if it’s supposed to be used on a keyring or as a charm.

The Mono Zero was originally released on 12 November 2007 and since its release it has won the iF product design award 2010 and the red dot design award 2010. It has also received Japan’s eco mark certification because of it’s high content of (pre-consumer) recycled plastic. The body of the eraser is made in Japan, while the eraser core itself is made in Korea. The Mono Zero has been designed by Ms. Chisato Takahashi, who  is also responsible for the Mono smart. I got mine as a free sample from The Pen Company where the current retail price is £3.47.

The Mono Zero is available either with a 2.3 mm round tip or broad 2.5 mm * 5 mm rectangular tip and each of these versions is available in either a black body or a black, white and blue body. There used to be a silver version as well, which – to me – always used to be by far the least attractive looking version. This silver version does not seem to be available anymore.

The eraser itself does not fill the whole body. This might come as a surprise when you have used other pen shaped erasers that come in a plastic body, but is not not really a problem. You do get slightly less eraser for your money, but the whole eraser (body plus eraser) itself is not expensive and the eraser core will still last a long time. Just to mention is explicitely, there are also refills available for these erasers, like for most pen shaped erasers. Labelled as an elastomer eraser, the Mono Zero contains an eraser made from ethylene propylene copolymer. When I received the eraser I did try it out and compared it to my favourite kind of eraser, a dust-free  or non-dust eraser (as long as it’s a dust-free eraser I usually like it very much). It’s probably not fair to compare it to my favourite type of eraser, or let’s say not objective – others might not like dust-free erasers, but then this comparison  is a valid approach as I am writing about what I like or dislike about the Mono Zero. 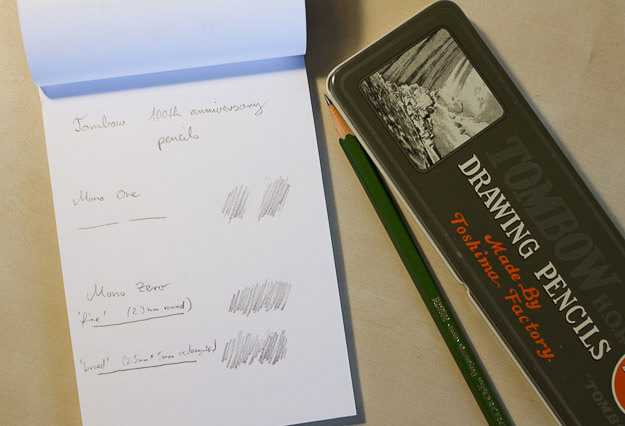 Comparison on Deli paper (A6)

For the pencil to be erased by the Mono Zero – I originally thought what better match could there be for the Tombow Mono erasers than a Tombow pencil, so I picked last year’s 100th anniversary special pencil. 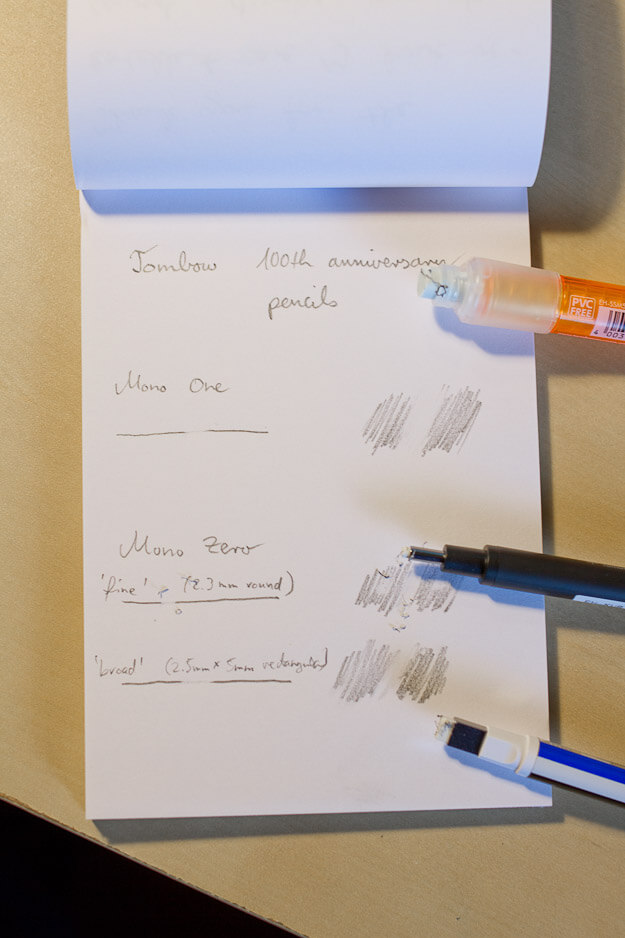 To my surprise the two Tombow products, pencil and eraser, didn’t seem to be able to cooperate that well with each other. This was due to the fact that the Tombow pencil is very soft. According to Pencils and other things the 100th anniversary edition has the same lead as the current Mono 100, but my 100th anniversary pencil seems much softer (and smudges easier) than a Mono 100 (both HB). I am not sure whether I’m imagining things here, or I just happened to have a softer than usual 100th anniversary pencil and a harder than usual Mono 100, or whether the lead is the same, but there’s actually a shift in grade (e.g. 100th anniversary HB = Mono 100 B). In any case, the Mono Zero was not able to eraser a strong line, i.e. drawn with some pressure, without a trace. It did however manage to eraser strong lines of harder pencils, in this case a Staedtler Mars Lumograph in HB, without a trace. 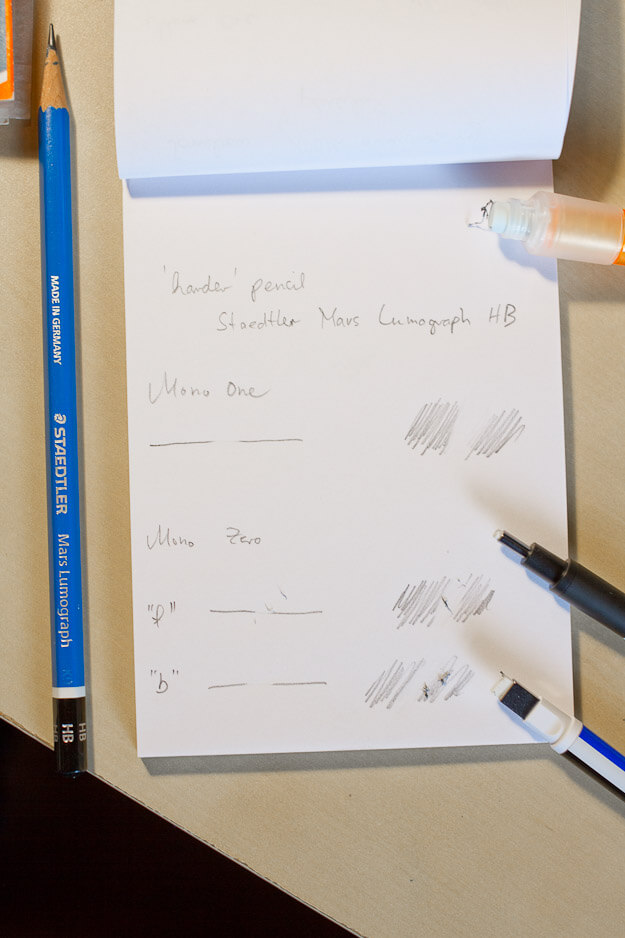 My impression of the Mono Zero was that it’s not the greatest performer when it comes to actual erasing (worse than a non-dust / dust-free eraser), but it’s strong point is precise erasing …because of the tip size and shape (a bit like a Kokuyo eraser). When I was looking for other blog posts to mention in this review I rediscovered Dave’s review of the Mono Zero, which came to the same conclusion regarding eraser performance.

A great eraser, because it’s fine ‘tip’ allows precise erasing, even though eraser performance itself could be better. 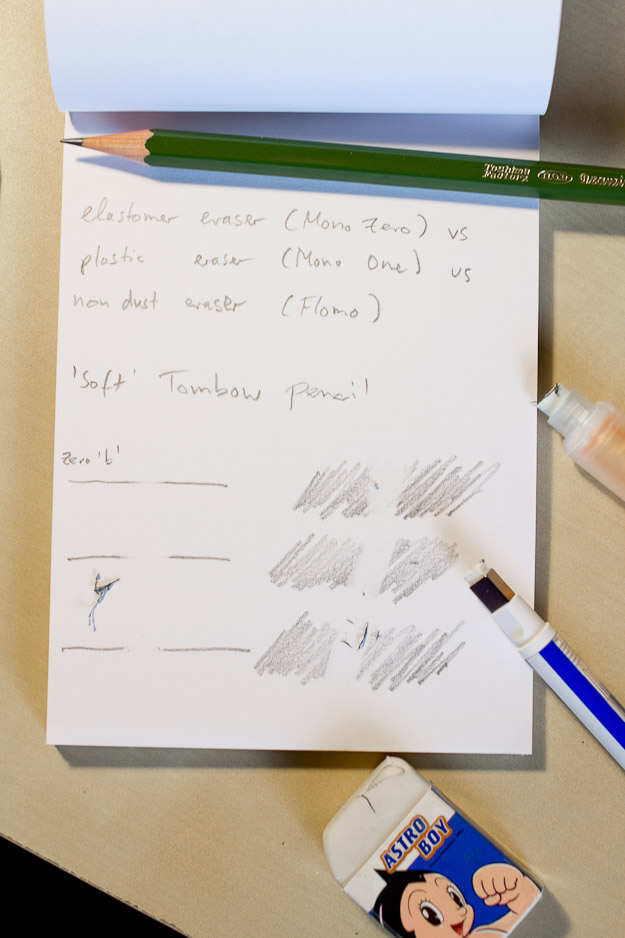 The Monos compared to a dust free eraser

The Mono One, designed by Mr Kazunori Katami, who holds a lot of stationery patents, was released slightly earlier than the Mono Zero – on 5 February 2007. The Pen Company is selling this eraser for £2.60. The body of this eraser is also produced in Japan (no eco mark certification for the Mono One, though), while the eraser itself is made in in Vietnam. Labelled as a plastic eraser, the eraser is made from thermoplastic elastomers. Despite the different materials, performance seemed pretty similar between the Mono Zero and the Mono One, with the Mono One maybe performing a little bit better.

The Mono One does not offer as precise erasing as the Mono Zero, the tip is bigger, but it is a nice size, which makes it a great eraser to carry in a pencil case bag or, possibly even on your key ring.

I would like to thank The Pen Company for these erasers, I got them as free samples, and Mrs. Balsewicz from Tombow Europe for all the information she has given me about these erasers.

I would like thank Sean for the Tombow 100th anniversary pencils.

Tags: eraser, Made in Japan, Made in Korea, Made in Vietnam, Mono One, Mono Zero, Tombow

Pelikan Pura (EF) Fountain Pen Review
My ancestry is 50% German, which may explain why I’m…

Which pens and pen brands do celebrities favour?
Pens are the starting point for countless pieces of music,…
There is 1 comment for this article