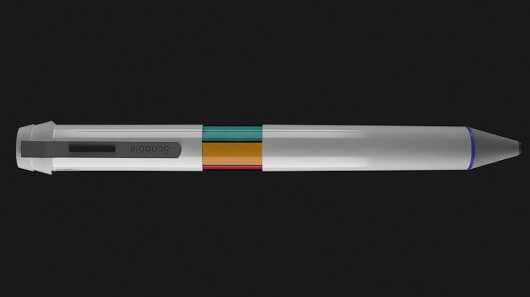 One of the great things about being a pen company in the 21st century is that we are able to see just how far a classic tool such as the pen can be changed, transformed and advanced as the years go by.

And this week has been no different.

One of the great plagues of most artist’s (and children’s) lives is that if they plan to do some art or work away from home, they have to take with them a whole spectrum of pens and pencils. But thanks to one innovating pen production company, all that may now change.

The new pen, named the ‘Scribble Pen’, is all anyone has to take with them, as it can recognise, replicate and produce up to 16 million colours – without having to change the ink.

All that uses have to do is simply ‘pick’ a shade from around their person and the pen will instantly draw that very same colour on a piece of paper, or if need be, on a portable device such as a phone.

But how does it work?

Simply by using a microprocessor and a sensor embedded at the end of the pen, it is able to detect shading when aimed at a close surface. The pen then mixes the ink within its body using small, refillable cartridges that come in cyan, magenta, yellow, white and black.

The stylus version of the pen works the very same way although it does not need ink, but instead uses an app which can be downloaded to tablets and phones upon purchase.

According to the developers, which are based in California, the pen is the first ‘colour picking pen’ of its kind and is on the verge of becoming ‘a future household gadget’.

‘For the colour blind, kids, interior decorators, homeowners, teachers, artists, photographers, designers and students, the Scribble colour picker pen will make copying an exact colour, any colour from any object, an absolute breeze.’

‘With Scribble you can scan, match or compare colours, draw on paper or your mobile device. We know people are going to love it.’

Like many of the electronic pens that we are seeing popping up around the world, the Scribble Pen is soon to go into production, using the Kickstarter website to fund the process.

It is thought that the ink version of the pen will go on sale in the United Kingdom for around £85, with the stylus coming in at around £47.

Review of the Mono Zero and the Mono One
Today: a comparison of different Tombow erasers – the Tombow…
Categories
Visit our shop
Archives