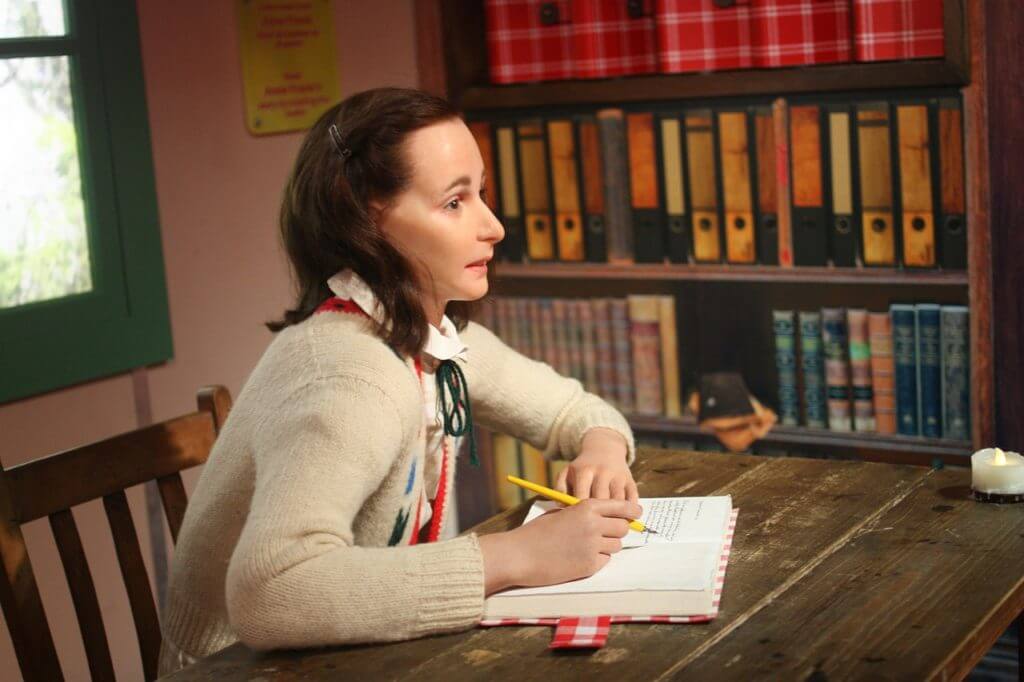 Who Was Anne Frank?

Anne Frank was a German Jewish girl who was living in Amsterdam, in the Netherlands, during WW2. The family moved from Germany to Amsterdam as a preventative measure when the Nazis came into power in Germany. The Nazis then went on to occupy the Netherlands from 1940, and Anne and her family hid in the ‘secret annexe’ of their house from 6th July 1942 until August 1944, when they were eventually captured and removed to concentration camps.

The family hid in secret upstairs rooms, concealed by a bookcase. It was in this confined space that Anne Frank put pen to paper and wrote her famous and honest diary, which was later published in 1947, after her death. In 1952 this was published in English for the first time, entitled The Diary of a Young Girl. It is still very popular today, and is often read in schools.

Anne’s first diary was in fact a red and white autograph book, which her father, Otto, bought for her 13th Birthday on 12th June 1942. She started writing in it a few months before the family went into hiding, which created an interesting contrast in the topics she wrote about and in her general mood and outlook.

When Otto Frank returned to the family home in 1945, he sadly came to realise that he was the only survivor of the family. He then became determined to get his daughter’s diary published, and dedicated the rest of his life to promoting it. I say ‘diary’ but in fact it will have been about 5 or 6 separate diaries in total.

Anne was gifted with a fountain pen when she was 9 and she continued to use it when she was in the Annexe, where it unfortunately perished in a fire. After it was accidentally swept into the fire, her father found just the clip remaining in the stove the next day. Anne was devastated.

There has been discussion between pen enthusiasts over the years as to what fountain pen Anne Frank used. The most popular suggestion seems to be that it was a Montblanc, but the company themselves are unable to verify or deny that, so we will no doubt never know.

Anne wrote an ode to her fountain pen; the below is an extract from that:

“My fountain pen was always one of my most prized possessions; I valued it highly, especially because it had a thick nib, and I can only write neatly with thick nibs. It has led a long and interesting fountain-pen life”

“When I was nine, my fountain pen (packed in cotton wool) arrived as a ‘sample of no commercial value’ all the way from Aachen, where my grandmother (the kindly donor) used to live. I lay in bed with flu, while the February winds howled around our flat. This splendid fountain pen came in a red leather case, and I showed it to my girlfriends the first chance I got. Me, Anne Frank, the proud owner of a fountain pen.”

Many of Anne’s diaries and compositions were written with that fountain pen, which she clearly adored and saw as a friend and ally in the difficult times she was living in.

The Diary of a Young Girl – Anne Frank