When we started selling pens on-line, James, Tom and I decided that we wanted to give potential customers as much information about the products as we could.  On the understanding that ‘a picture is worth a thousand words’, we thought that it would be a good idea to provide as many appropriate product images as was reasonable.

However, we soon discovered that while manufacturers are happy to provide images, the range was limited, usually to a standard ‘letterbox’ shot and it was very rare to find images which showed any detail.  It was decided that we would take our own.  This was the start of a very steep learning curve, as although all three of us took pictures, we soon discovered that product photography was a whole new ball game.

It also meant that we had to have the stock: something most of our competitors don’t.

We started with an old Minolta digital SLR camera, and a photography tent, both bought from e-bay.  A professional photographer friend of ours gave us some old but serviceable studio flashes and tripods on semi-permanent loan and we were in business.  Looking back, I cringe at how incompetent we were (or more accurately, I was).  One of the joys but also drawbacks of digital photography is that once you are set up, you can click away ’till your heart’s content’ at no extra cost.  The problem is that I was trying all sorts of settings and techniques, with no organised rationale and it was taking an inordinate amount of time to produce what were very poor images (some of which are still on the site – sorry!).  I decided to experiment with permanent lighting, rather than persevere with flash (a bad move) and decided to try using some standard compact fluorescent energy-saving lamps.  This didn’t work too well either.  It wasn’t until some time later that someone at a trade fair explained that I needed to use ‘full spectrum’  photographic lamps.  Ordinary domestic lamps have some of the visible spectrum missing or reduced and those colours then just don’t appear in the image!  No amount of post processing (or none that I knew of) would get them back.

Spot the difference: Lamy Taxus photographed in the light box with lots of post-processing and Al-Star photographed with new kit straight from the camera – almost.

At that point we decided that to do this properly we would need to invest in some kit.  We bought a Mini Photo Studio (a metal box with lights in) and a new Canon digital SLR.  This arrangement proved much more successful and we persevered with this for several years.  However, it was not ideal.  Reaching in to the box to set up the pens was fiddly and awkward: you just get it set up right and then manage to knock it  taking your hand out.  Also, the very even shadowless light produced in the box removed detail and could result in a shiny chrome pen almost disappearing.  Other techniques needed to be developed to bring the pens back to life, both in the box and in post processing. 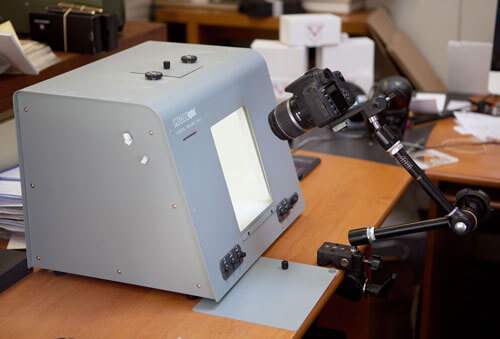 The statement “Pictures don’t lie.” is now a lie, thanks to the computer and digitization. For those of you that haven’t come across it, the possibilities of what can be done to an image with an image processing package are only limited by the skill, ingenuity and knowledge of the operator. I firmly believe that no single person can know how to use all of the myriad of tools, adjustments and effects available:  each operator learns that sub-set of tools that they need for their particular field of interest, in my case about 1%. This software enabled us to enhance the images and also to make sure that they are on a completely white background. However, this was taking much too much time and waiting for the images was stopping us adding new products to the site. 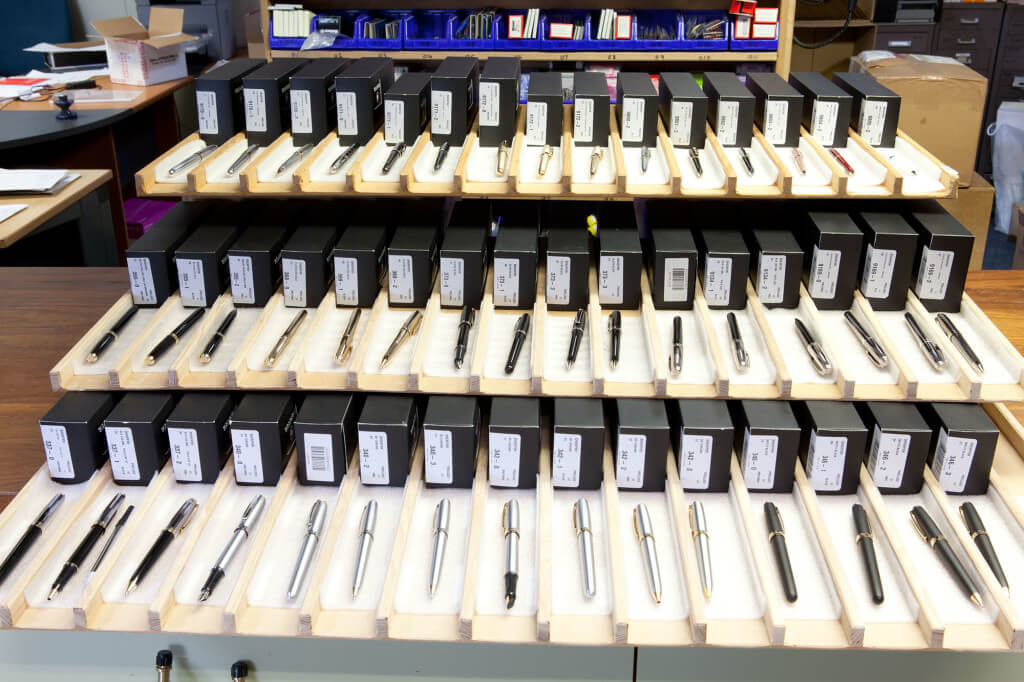 Some of our new Sheaffer stock waiting to be photographed.

Phase three of the photography trilogy was to invest more money in proper kit. One of my other sons is a graphic designer and as part of his business has a very good digital SLR camera. He suggested that was what we needed too. Now, I had always assumed that as images for web are all 72 dpi, there was absolutely no point in using an expensive camera to produce huge high definition images which were then going to be cut down to a mere 72 dpi. Wrong! Adam loaned us his camera and it soon became apparent that the huge amount of data available in these very large images made post-processing easier, quicker and more accurate.

The decision was made and James and I went off to the photographic show at the NEC (National Exhibition Centre, Birmingham, for those readers outside the UK), and came back with a beautiful Canon SLR, two lenses, including a macro lens, four 500 Joule Bowens studio flashes complete with stands, soft boxes, etc. various other goodies, and a lot less money in the bank. We then set about setting up a studio area in one corner of the office, complete with black curtains all round, which gives us 100% control of the lighting. 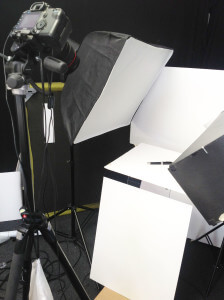 In the same way that buying an expensive set of clubs doesn’t make a good golfer,  buying an expensive camera and studio flashes doesn’t make a good product photographer. I was almost starting again, with a lot to learn. However, with good kit and my previously acquired skills, it was a much shallower learning curve that before and I soon started to produce some good images.

This is where we are now. Still learning, producing quite good images, not necessarily glossy magazine quality, but better than any other pen website. Best of all, we are now very quick!

This example of our early work using the new kit uses the technique of ‘focus stacking'”. Multiple images are taken with different focus distances. These are then ‘stacked’ using that part of each image that is in focus. This overcomes the depth of field problems associated with macro lenses, but takes a little while.

Introducing the pen that can write using 16 million colours!
One of the great things about being a pen company…

The best writing tools for left-handed people
With 10 per cent of the world’s population being left-handed,…