In a world full of writing and drawing instruments, the humble beauty of the wooden pencil is often overlooked.

However the pencil manufacturing process leaves much to be marveled at. The art of pencil making is surprisingly interesting and varies little between manufacturers.

Discover how a wooden pencil is made and gain a deeper appreciation for this staple piece of stationery ahead of National Pencil Day on March 30th.

What is a wooden pencil?

The most common wood used for pencils is cedar – one tree can make up to 300,000 pencils. While the centre of a wooden pencil is still often referred to as the lead, it’s actually made from graphite encased in wood.

To form the centre, clay and graphite are mixed together. The ratio of clay to graphite will determine how hard or soft your pencil will be, how light or dark it writes on the paper, and how smoothly it writes.

This is how pencils obtain their hardness grade, such as your HB, 2H, 3B, and so on.

Pencil grading differs around the world.

In Europe, the grade scale goes from 9B – 9H, while in the U.S. pencils are rated from #1 to #4. However, the Americans also use the European scale for pencils outside of this range.

H refers to the hardness and B to the blackness of the lead. F means firm. H pencils produce sharp lines, while B lead is softer and smoother.

The Japanese typically prefer their pencils to write a bit darker so, even though they use the same grading system of 9B – 9H, the lead will be darker.

There is no standardisation for the grading of pencils, so different manufacturers will vary slightly.

How much does a pencil weigh?

How much a wooden pencil weighs depends on the pencil’s grading and also the quality of the wood used.

Cheaper wood means a lighter pencil, although an added eraser will increase the weight.

The history of wooden pencils 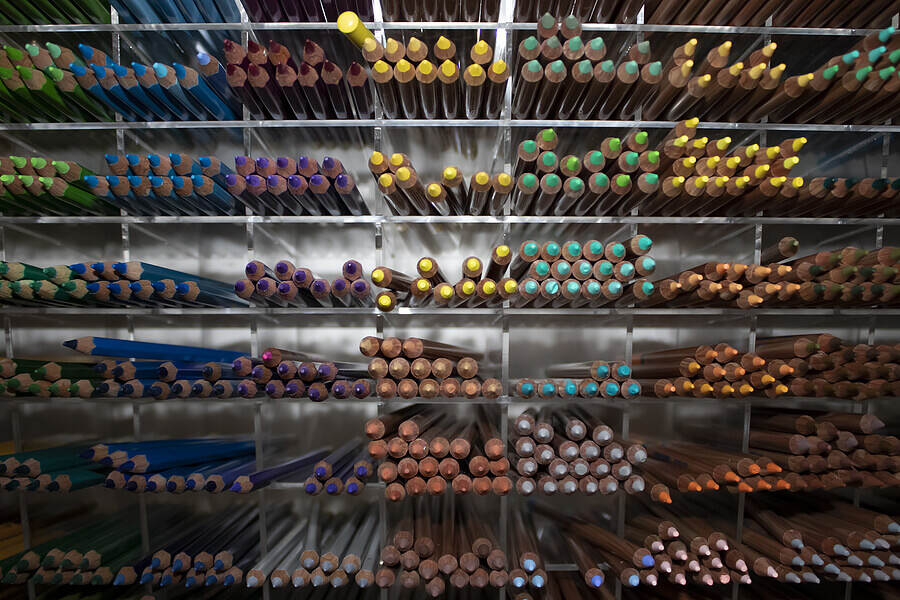 The history of the pencil began in the early 16th Century when a large deposit of graphite was found in Cumbria, England.

People found that graphite could be easily sawn into sticks, and these early writing instruments were first used to mark the local sheep. The first graphite sticks were squared-shaped and wrapped in string or sheepskin to protect the brittleness and the user’s hand.

While England maintained a monopoly on graphite pencils until the second half of the 19th Century, an Italian couple had actually invented the wooden pencil back in 1560. This original version was more similar in shape to today’s wooden pencil, and the process of making pencils, largely as we still do today, was invented shortly afterward.

Later, France, unable to import graphite from England or Germany because of the Napoleonic Wars, was forced to invent something else. A French officer mixed powdered graphite with clay and discovered it could be used as a core of pencils, the hardness changed by controlling the level of elements in the mixture. The same method is still used now.

In 1858, Hymen Lipman was the first person to attach an eraser to the end of a pencil and by 1920, almost all pencils sold in the USA included erasers.

How to make a pencil

The wooden pencil manufacturing process has differed little since it was first established by the Italian couple way back in the 16th Century.

Factories still use the same method of encasing a graphite core between two pieces of wood.

Here’s how to make a pencil step by step.

First, the graphite is ground down and mixed with powdered clay and water to produce a thick paste. The paste is then fired into a kiln, resulting in a strong lead core that is difficult to break and smooth for writing.

After the wood is treated and cut into squares with grooves, the graphite is poured into the wood slats along with glue, and another piece of wood is stacked on top.

Next, the wood slats are squeezed together and a mechanical table saw is used to cut individual pencils from the large graphite ‘sandwich’.

Finally, the pencils are sprayed with a lacquer to give them colour and shine. An eraser is added to the end of the pencil (if using) and the pencil barrels are decorated with any desired images or text.

Most pencils come already sharpened, however there are many ways to sharpen a pencil to ensure it is properly taken care of and maintains its performance.

Perfect for drawing and sketching or just general notetaking, The Pen Company stocks a fantastic range of mechanical and wooden pencils from a variety of well-known brands. Choose a sleek design or stylish practicality, and fall back in love with the pencil.

Lamy Scribble Mechanical Pencil Review
Me and Lamy, Lamy and I You might not have…