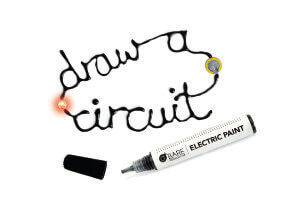 We recently wrote about the chocolate pen, and we’ve seen other exciting and unusual pen developments within the past year or so, such as the 3D doodler. Now, though, there is a new pen on the market and it really is unlike any other out there; the unique Electric Paint pen by Bare Conductive.

The black paint produced from this pen is water soluble, non-toxic and solvent free. It is also conductive, and is like a liquid wire that hardens! It can be applied to a myriad of materials – such as paper, textiles and plastic – and has a wealth of possible uses. It is completely safe for children to use, so it is a great tool for kids, teens and adults alike to explore electricity and conduction. It could even be used in the classroom.

The paint from this pen dries quickly at room temperature; it is usually fully dry within 5 minutes. When it is dry, it becomes conductive. If you make a mistake or have a spillage situation, the paint can be easily removed from most surfaces with some soapy water. 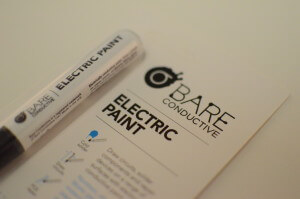 The Electric Paint pen in its packaging

The Electric Paint pen can be used as a “liquid wire and a conductive adhesive”, and your limit really is your imagination, as you can see by the two tutorial examples below. You can create your own projects, or the company who makes the pen also makes an array of LEDs, touch boards, flashing card sets and other things you could use to create all manner of electrical fun. I personally love the Glowing House Set!

Not only can the paint pen be used for creation, but it can also be used for repairs, such as in soldering jobs, with the bonus of no dangerous heated tools being needed. The pen’s paint can also be used as an insulator or used with standard acrylic paint to create multi-layered circuits. You can spray it with waterproofing spray to make it waterproof, and you can use it as a normal paint – meaning you can get a brush involved, or rollers, stencils etc. You can even use it to screen print! 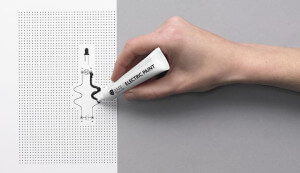 What would you use the Electric Paint pen for? What projects would you try?

Nostalgia at Christmas – bring back those magic memories
According to a survey carried out by research agency, Voxburner,…

Samsung Galaxy Note to have one very special extra
Here at The Pen Company, we absolutely love hearing about…
Categories
Visit our shop
Archives