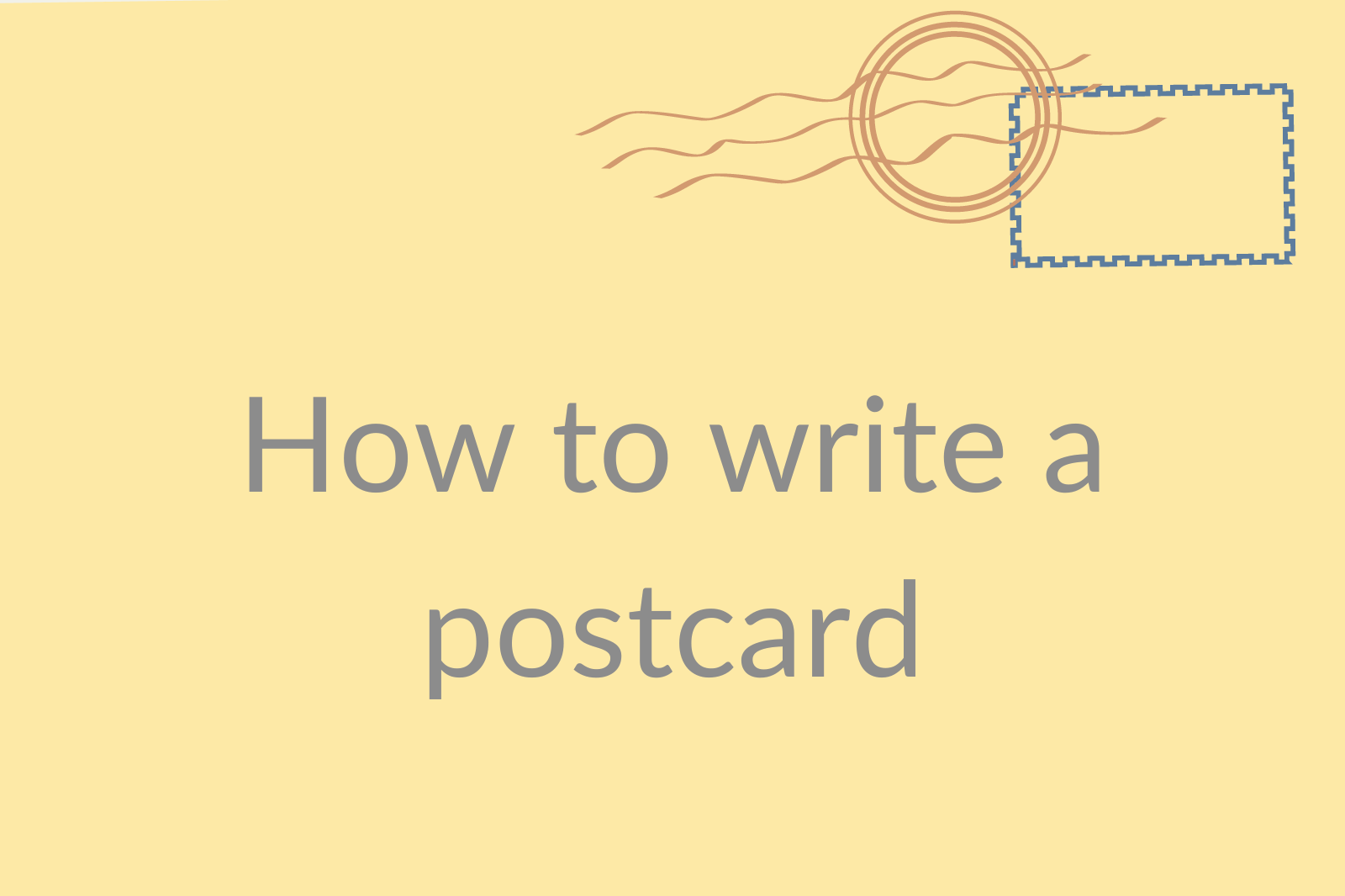 Sending and receiving holiday postcards has a certain kind of magic. They’re tiny memos that have travelled far and wide, sometimes from an exotic destination, to reach their destination. Sharing details about the spectacular weather, exciting activities, or how scrumptious the food is, a postcard also comes with the promise that the sender was thinking of you while on their trip. How lovely!

With just a small surface area to work with, deciding what to write on your postcard can be a daunting task. We’ll take you through how to write a postcard and the best things to include before you send it off into the big wide world.

The history of the postcard 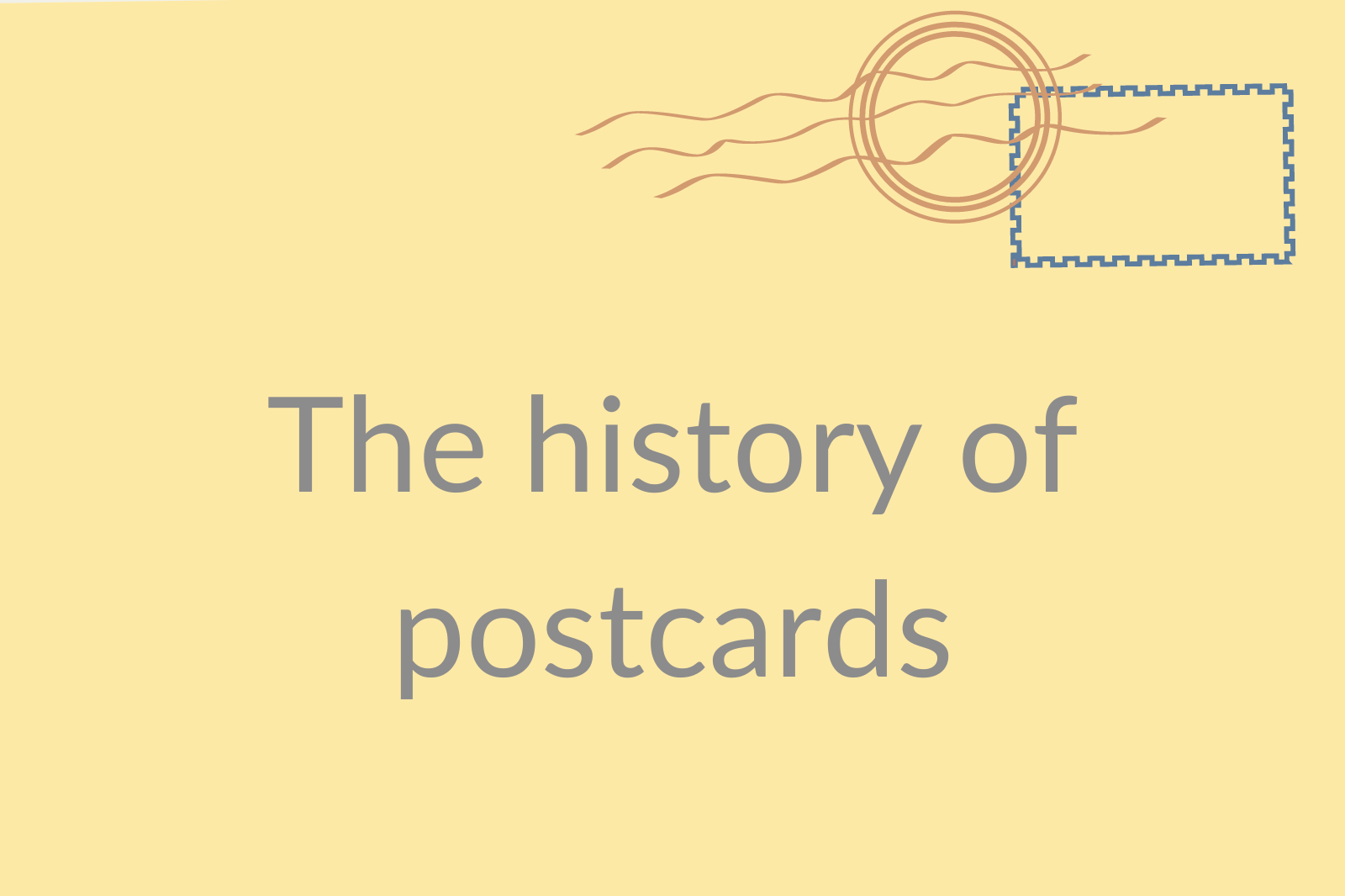 Postcards were first issued by Austria-Hungary in 1869 at the suggestion of Dr Emmanuel Herrmann. They were first written in either German or Hungarian and quickly became a popular way to communicate.

They arrived in Britain soon after, commissioned by the British Post Office in 1870. British postcards were heavily influenced by the original Hungarian design and were available in two sizes. They included an imprinted stamp to cover the cost of postage, which was half the price of a letter at the time. Like today, postcards were only printed on one side, with space to write the message on the reverse.

Postcards were initially developed for brief and informal communications where a more formal (and pricier) letter wasn’t required. By 1871, around 75 million postcards were sent in Britain, rising to more than 800 million a year by 1910.

Illustrated postcards, as we mostly recognise them today, were not actually accepted by the Post Office until 1894. In these early designs from private publishers, one side of the card was used for the address and stamp, while the message had to be squeezed in alongside the image.

In 1902, messages and addresses could be written on the same side. Postcards then began to develop the more recognizable divided back design, where the address is written on the right and the message on the left.

While they are now mostly used by holidaymakers, postcards have gone through various uses in their lifetime.

Lovers used postcards in the early 1900s to swap romantic messages. This was especially useful during the First World War when couples were separated. The colour and angle of the stamps also conveyed a hidden message between the pair. For example, a red stamp angled slightly to the left could mean ‘I am faithful to you’ while a green stamp facing the bottom left often meant ‘have you forgotten me’.

Some postcards also offered an insight into more serious themes. Jolly images of soldiers on the frontline were used on postcards during WWI to boost morale back home. Meanwhile, those who objected to the conflict used postcards to communicate the conditions of the prisons they were placed in.

With the introduction of the Holiday Pay Act in 1938, many in the lower class could go on holiday, documenting their seaside visits through postcards. Images of piers, bandstands, deckchairs and donkeys were incredibly common.

One of the most popular postcard manufacturers was Bamforth and Company Ltd. Started by portrait photographer James Bamforth in 1870, Bamforth was famed for its saucy and innuendo-driven postcard designs, which are now synonymous with classic British seaside memorabilia.

Nowadays, postcards can be highly prized or collectable items, and you can even attend a postcard fair.

You don’t need to be on holiday to pick up a postcard either – most museums, galleries, or attractions have postcards available to buy. Whether posted, placed in a scrapbook, or used as a bookmark, seeing a postcard will always evoke a memory of your experience.

How to send a postcard 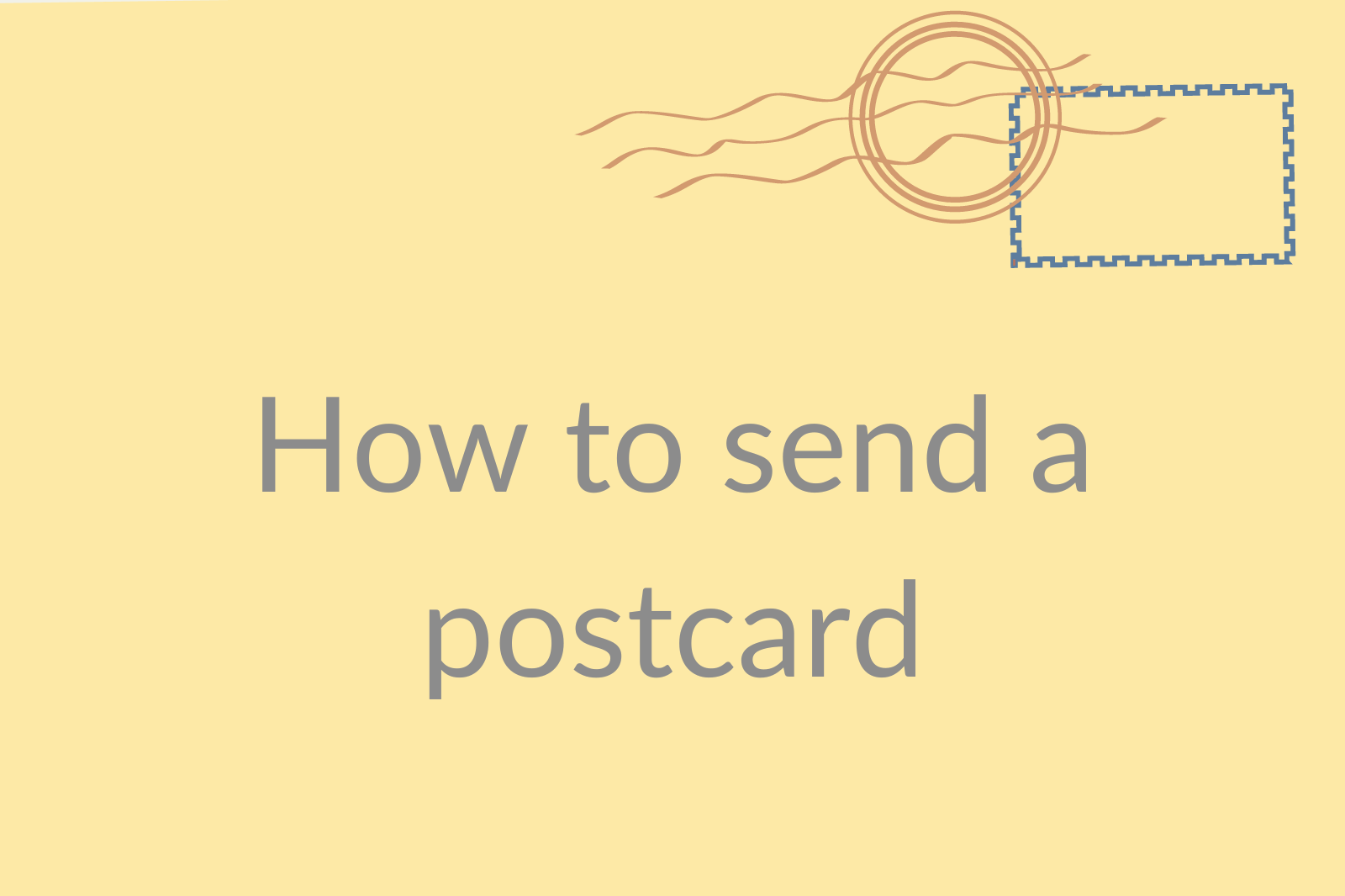 Sending a postcard is relatively the same no matter where you’re posting from. The only thing that may differ is the price of postage, which varies depending on where you are posting to.

Before buying your postcard, ensure there is a nearby post office from which you can send it – ask the shop owner if you’re unsure. Some postcard sellers will also sell stamps. Just make sure the postage is enough to reach your recipient before you stick it on the postcard.

How to address a postcard 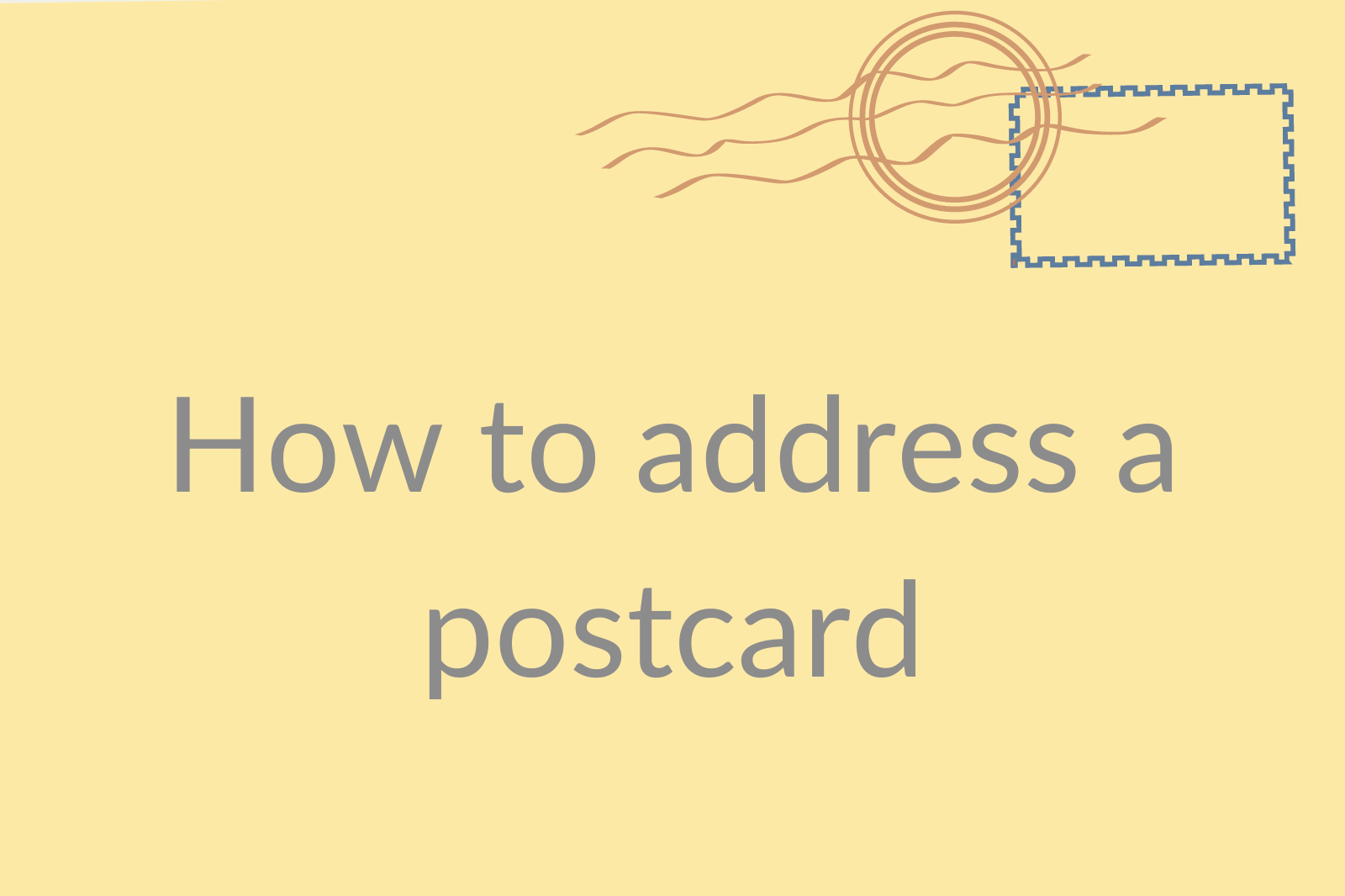 It’s important to address a postcard properly, otherwise, it may not arrive at your intended destination.

Write your recipient’s full address clearly on the postcard, using block capital letters if possible. To avoid confusion, include the country and continent as well. This will also allow the post office to easily determine how much the postage will cost.

Do you put a return address on a postcard?

It’s not necessary to put a return address on a postcard. However, if the post office is not able to deliver your postcard, they will be unable to return it to you without an address. It’s also worth popping your home address on the postcard, especially if you’re returning to the UK soon.

Where to write on a postcard 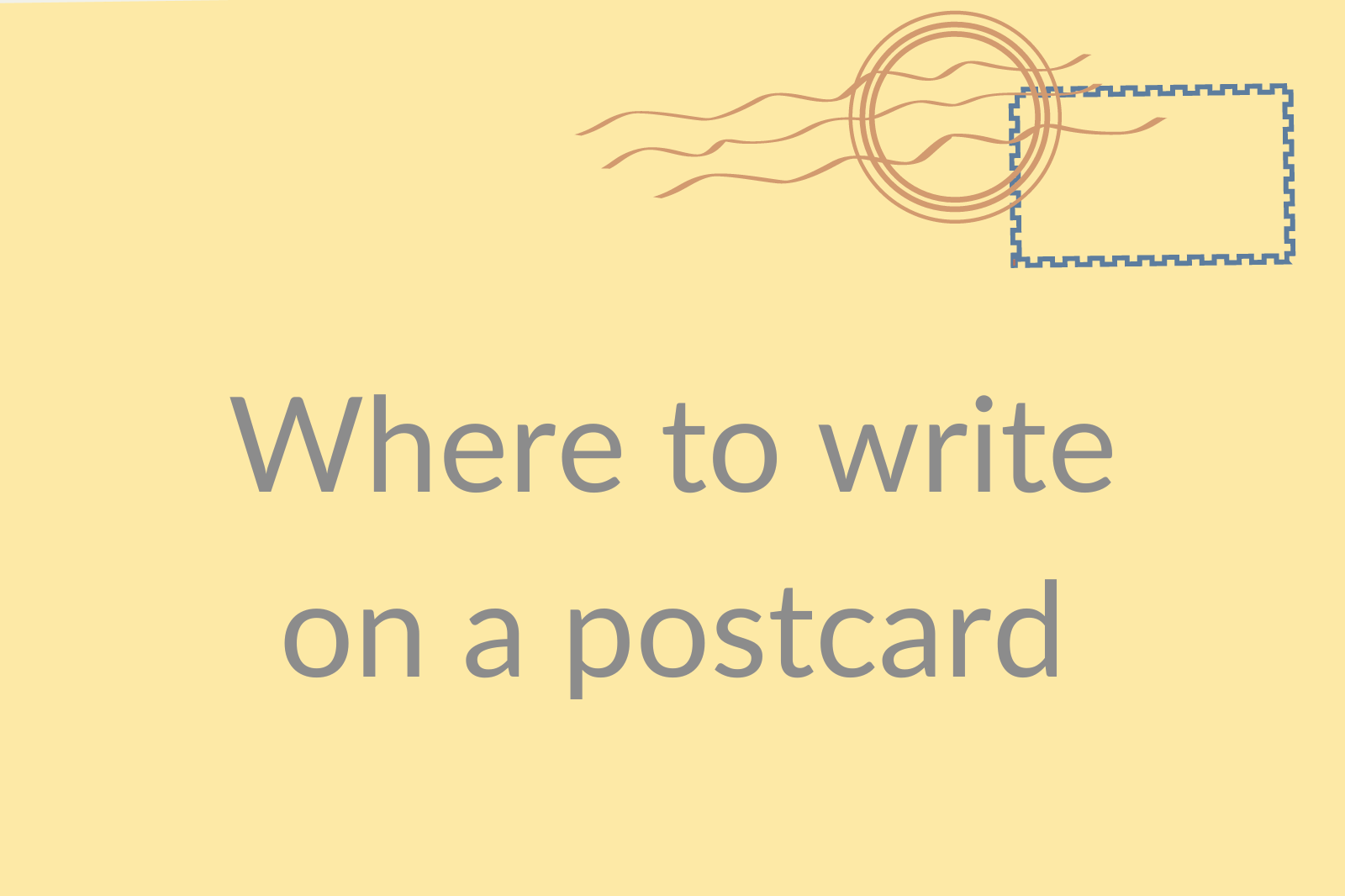 Most postcards have local images and the name of your holiday destination on one side, with a blank space and designated address area on the reverse.

Make sure to only write the postcard address in the enclosed area, otherwise, the post office may not be able to read it. Keep your message short and within the lines, not obscuring the address or postage stamp area.

Occasionally, a postcard may have a different layout. However, there is usually a particular space for the address and postage stamp that you must write within.

What to write on a postcard 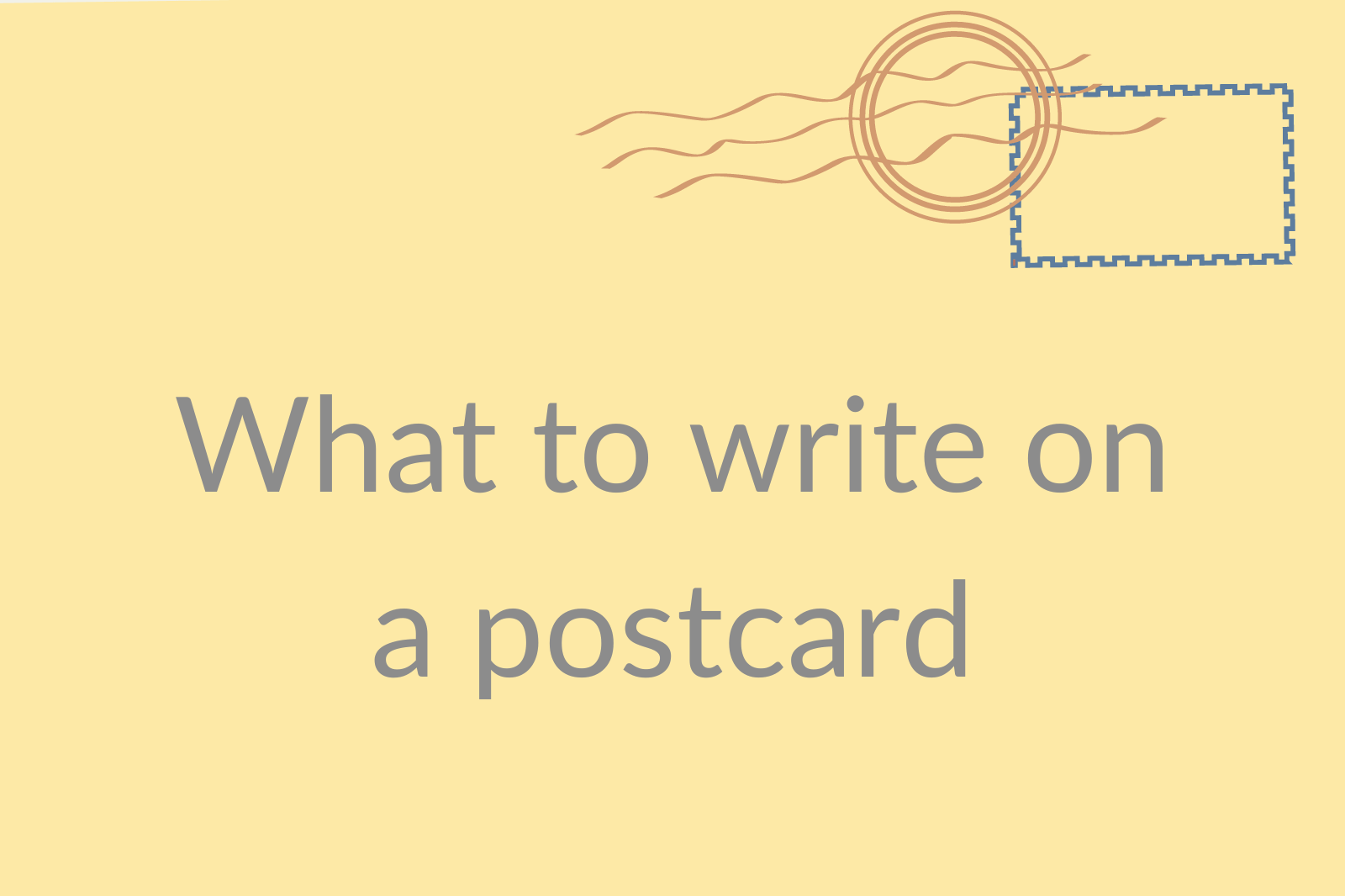 Now you’ve discovered more about the fascinating history of postcards as well as the ins and outs of posting one, it’s time to write one yourself.

Having such a small space for a message can prove difficult for some, especially if you’ve experienced a particularly busy holiday. However, these postcard writing ideas are certain to inspire.

What to write on a postcard to family 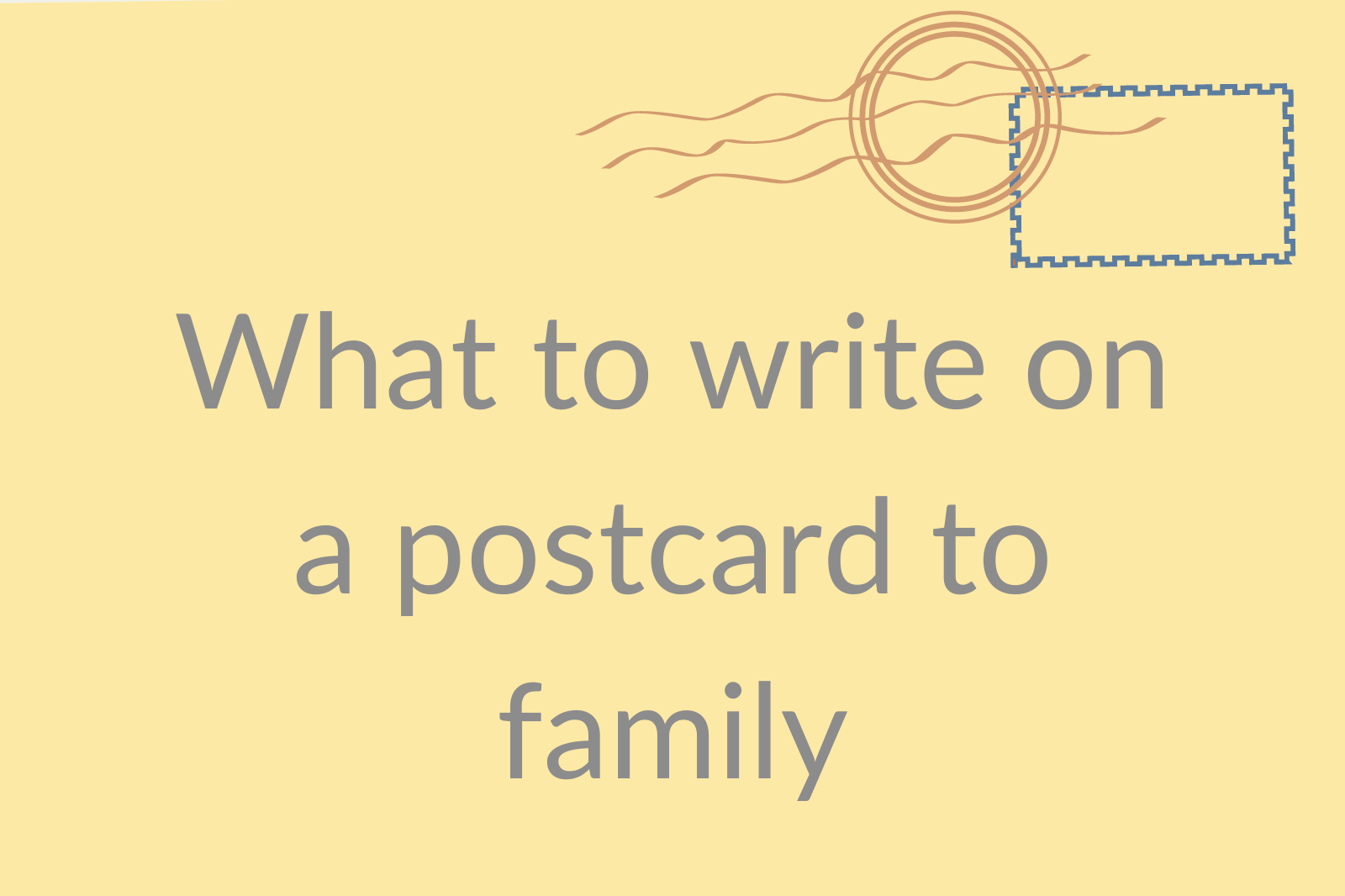 If you’re holidaying without your family, they’ll no doubt enjoy receiving a postcard from you about the details of your trip.

To start with, write about what you did that day, sharing any new experiences you’ve had or things you’ve learnt during your time away. Try writing a basic phrase in the local language or discussing any classes you’ve taken on your trip. This will show your family that your holiday has allowed you to grow as a person – something they’ll love reading.

Younger family members will also appreciate a doodle of an activity you did, so they can better understand and feel included in the postcard.

What to write on a postcard to grandparents 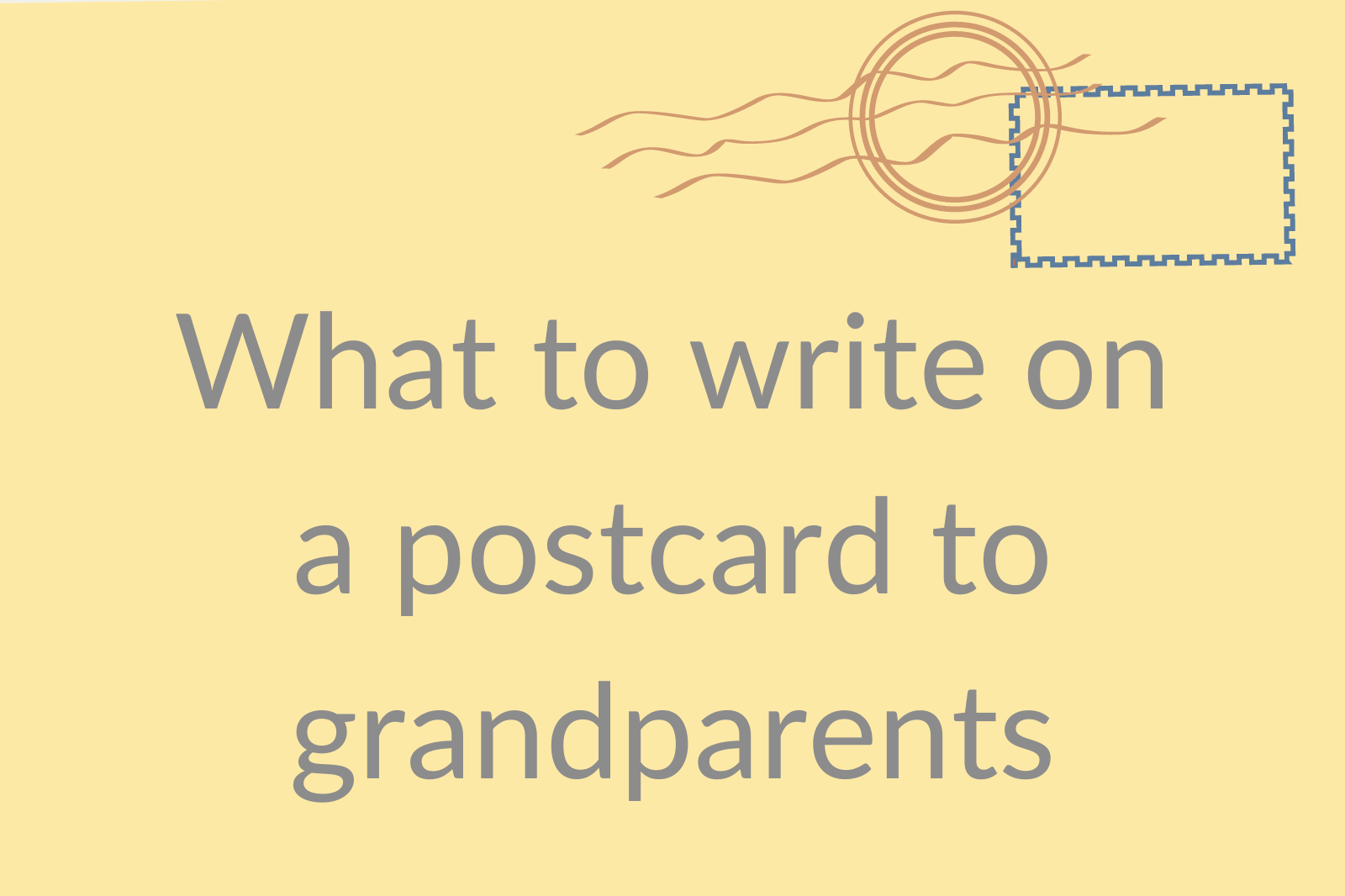 Grandparents are usually the most appreciative of postcards.

In their earlier days, postcards were used as notes between lovers and general correspondences between friends, which your grandparents may well remember. Sending a postcard to your grandparents could evoke nostalgic memories of trips to the UK seaside, where postcards found their ground.

Mentioning the weather is a classic British pastime and always goes down a treat on a postcard, especially if you’re enjoying some sunshine during your trip! Write about the area where you’re staying, mentioning any notable landmarks your grandparents may be familiar with. Discuss some traditions of the country you’re visiting or something interesting you’ve discovered while away.

What to write on a postcard to your partner 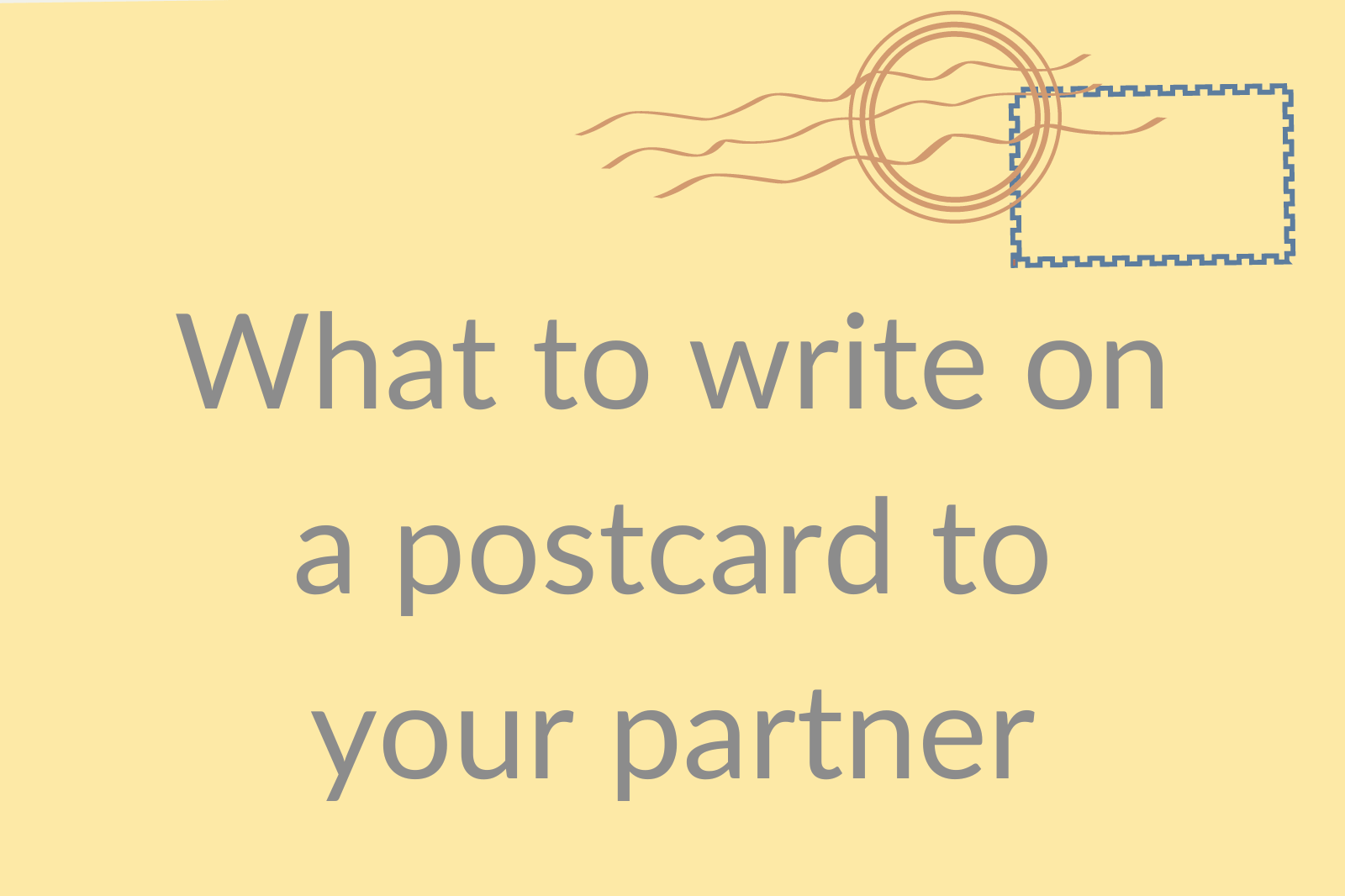 Deciding what to write in a postcard to your lover can be particularly difficult. You’ll no doubt be missing them and want to share all the minute details of your holiday within the tiny space on the card.

Begin with a personalised thought about the recipient that will make them feel truly special and tell them about an activity or local dish you’ve enjoyed that you also think they’d love. If food is a  part of your love language, share a recipe you can’t wait to try together when you return. They’ll also want to know that you are safe and having fun, so make sure to reiterate that you’ve been busy and are thoroughly enjoying all your new holiday experiences.

What to write on a postcard to a friend 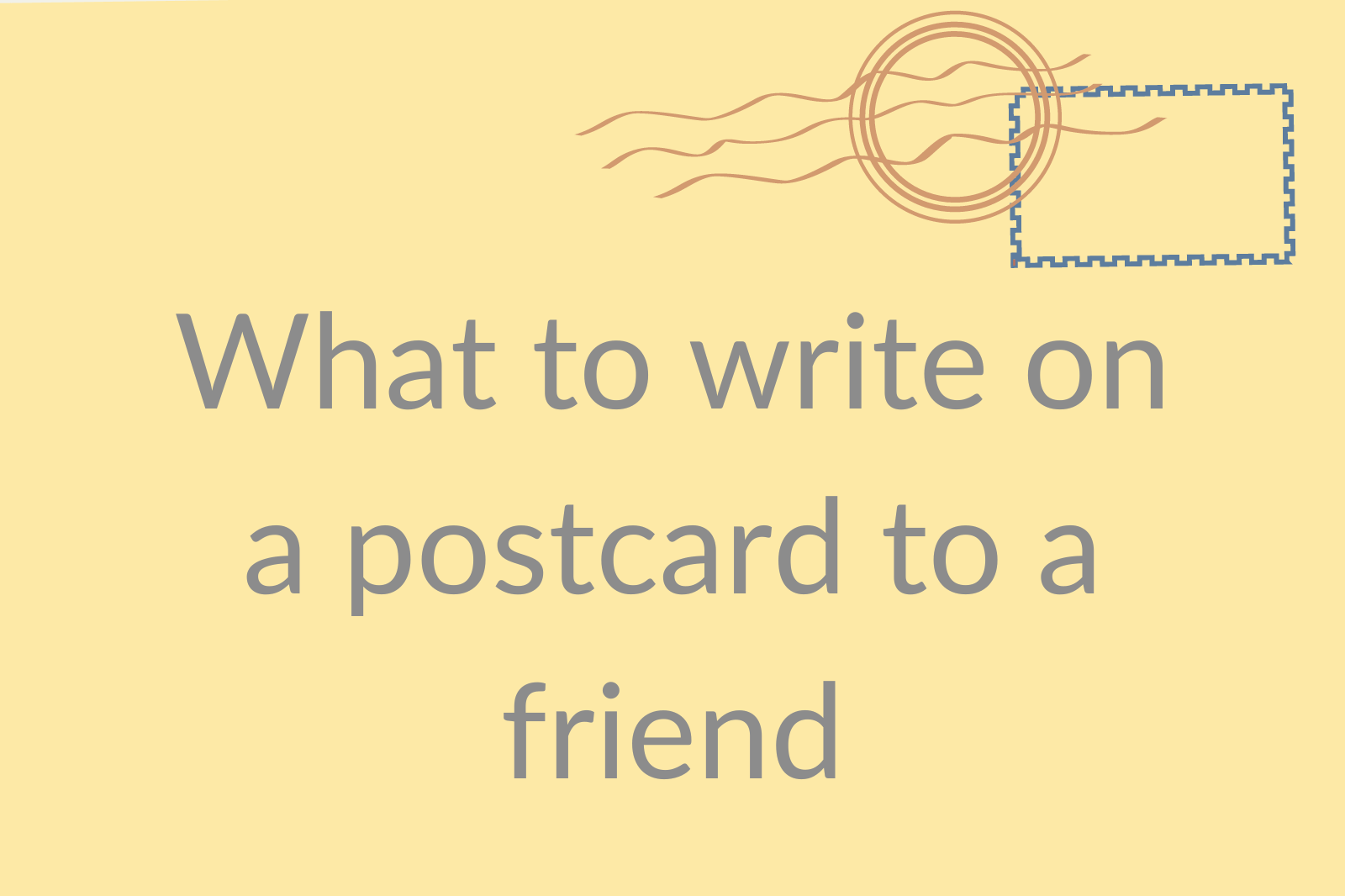 Sending a postcard to your friend is a lovely way to show someone you are thinking of them while you’re away. This is especially thoughtful if it’s someone you don’t see very often – a postcard can be a wonderful surprise and be cherished for years.

If your friend doesn’t know you’re on holiday, begin your postcard by explaining the purpose of your trip and who you’re holidaying with. If the recipient also has a case of wanderlust, use your postcard to share the local travel tips you’ve discovered.

Postcards for friends also have the freedom to be a little more playful – if something funny or interesting happened on your trip that’s bound to make them smile, let them know. This is a wonderful way to add a personal touch to your message.

If you came to this guide wondering ‘what do people write on postcards?’, we hope you’re finishing with a better understanding and increased excitement about sending out your holiday details.

Writing a postcard is a joyful experience, made even more fun with the addition of a trusty pen. Known for our exquisite writing tools, bring your Pen Company pen with you on your next trip to ensure you aren’t left empty-handed when writing about your trip.