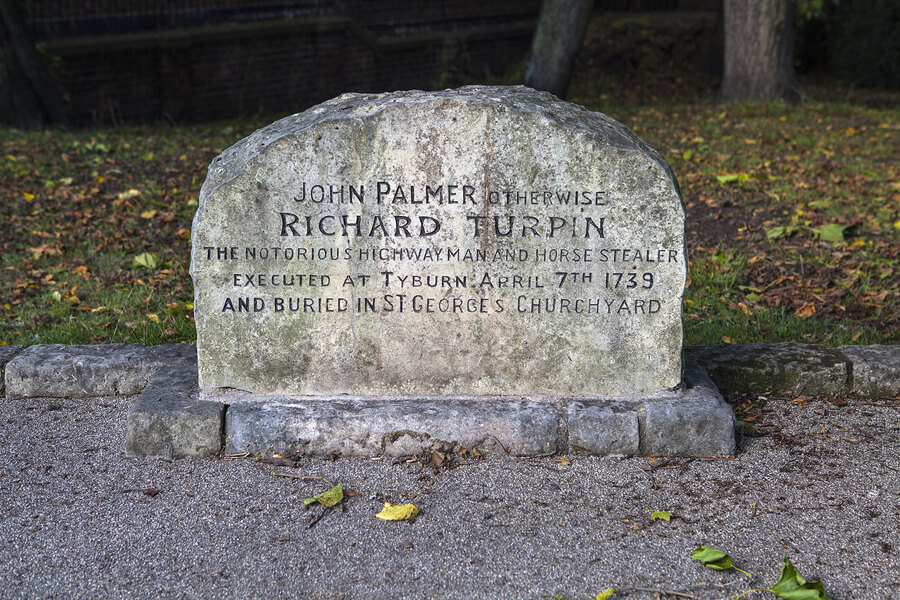 Richard (“Dick”) Turpin (1705-1739) was a notorious highwayman in Georgian times. However, his story is actually full of more crimes than he is well known for. He started his work life as a butcher in Essex – following in his Father’s footsteps – however his ‘career’ later took a turn towards the less legal side of things. This change first occurred when he got involved with a local gang – often referred to as the Gregory Gang – who were deer thieves.

However, as gang members diminished in numbers, the gang changed its focus from deer poaching to house burglary. They committed many such burglaries until 1735, when 3 gang members were arrested and jailed; one of these, John Wheeler, gave descriptions to the Police of the gang members still at loose.

The rest of the gang were caught and executed during 1735, with the exception of John Wheeler who was freed for his cooperation in catching the others but died in 1738, and Mary Brazier, who wasn’t as involved as the men, and was therefore transported to the Thirteen Colonies instead. Jeremiah Gregory also died in jail from a shot wound sustained during his capture, but would have been executed had he lived.

At this point in his life, Dick Turpin became a highwayman, which is the crime most people know him for. Despite most popular illustrations of Turpin being of him alone on his horse, he rarely worked alone – he first paired up with Thomas Rowden, and later – briefly – Matthew King and Stephen Potter.

After King & Potter were captured, Turpin went into hiding in Epping Forest. A servant of a Forest Keeper, Thomas Morris, found him and tried to capture him, but Turpin shot and killed him instead.  Turpin was already a wanted man but a reward of £200 was offered for his capture after this latest crime was committed.

In the Summer of 1737, Turpin made his way to Yorkshire under the alias of John Palmer. Here he settled and financed his lifestyle with highway robbery and also cattle and horse rustling. In 1738, after a failed shoot, he shot a cockerel which belonged to his landlord, John Robinson, and then threatened to kill Robinson also! This final crime led to Turpin being arrested and taken into custody, whilst ‘John Palmer’ was investigated.

From York Castle, Turpin penned a letter to his brother. Unfortunately for Dick Turpin, his brother didn’t wish to pay the sixpence postage that was owed on it, and the letter was therefore returned to the Post Office. Turpin’s former schoolmaster was working in the Post Office at the time, and recognised Turpin’s handwriting.

Knowing Turpin was a wanted criminal, Post Office worker Mr Smith took the letter to a local magistrate and then visited Turpin in York to identify him in person. Turpin was sentenced to death, and was executed on 7th April 1739.

Is this the earliest known incident of someone being caught out via their handwriting? Nowadays, graphologists are often called in to work alongside Police with cases that could be helped along through handwriting analysis.

5 amazing famous signature facts
Usually the interaction is quite simple; a fan approaches a…

5 Reasons Handwritten Letters Are Still Relevant & Wonderful Today
For the majority of us nowadays, email is an integral…