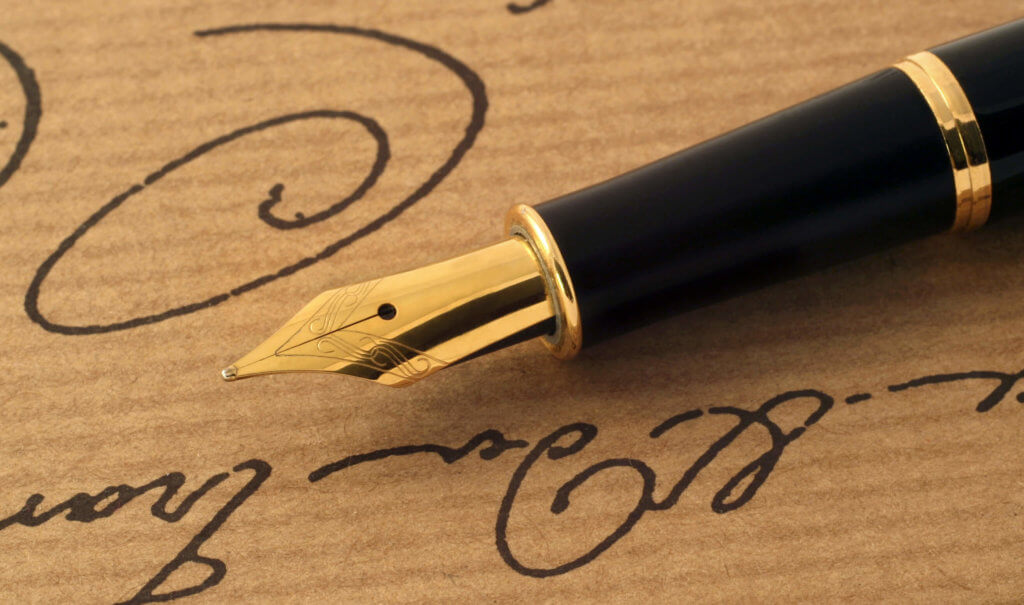 Fountain pen calligraphy has been a popular pastime for generations but in recent years, it’s seen a resurgence just like fountain pens have. It’s an activity that requires focus and concentration, and while getting it perfect can be frustrating at times, it’s also relaxing and yields a decorative result.

A fountain pen calligraphy nib makes it easier to get the thin upstrokes and thicker downstrokes that characterise calligraphy and give it its uniquely artistic aesthetic. A good fountain pen will be a trusty companion while learning new techniques, and allow you to apply them consistently once mastered.

Calligraphy dates back to the Shang dynasty in China, around the 16th century BC, and the earliest examples are carvings in animal bone. It is an artform that uses different thicknesses or ‘weights’ of stroke to produce lettering with a distinctive appearance, and has become widely used for craft projects, greetings cards and ornate formal documents.

Modern calligraphy became popular at the start of the 20th century, after the artist Edward Johnston became interested in it. He devised a chisel-tip pen that would produce a narrow stroke in one direction, but a broad stroke in the other.

This principle can be seen in modern calligraphy pens, from chisel-tip felt pens, to calligraphy fountain pens, and also calligraphy brushes which achieve the same effect using paint, rather than ink.

Should you use a specific writing tool for calligraphy?

You might find it easier to learn calligraphy if you choose a good quality fountain pen and use the same pen throughout. Like any tool, you’ll get a feel for how to apply the right pressure, and once you’ve got that technical ability, you can focus on the details of different calligraphy techniques and typefaces.

A fountain pen calligraphy tutorial is a great place to start. This will help you to practise the different parts of each letter, including the leading strokes, curves and turns, as well as decorative ascenders and descenders on tall characters and those with a tail.

How to use a fountain pen in calligraphy

Here’s our rough guide to how to write calligraphy with fountain pen nibs. If you’re new to using fountain pens at all, you might also like to read our Guide to Writing with a Fountain Pen.

Draft your calligraphy on paper with a pencil

A pencil draft is a good starting point. There are two ways to do this: you could draft the characters exactly as you want them to appear, complete with thicker downstrokes. Alternatively, you could just draft the basic shapes of the characters in fixed-width pencil, then apply the thicker strokes during the inking phase.

Choose a nib for your fountain pen

Not all fountain pen calligraphy nibs are the same. The width of the nib can affect the weight of the downstroke, and kits like the Kaweco Calligraphy Mini Set Fountain Pen include interchangeable nibs for different weights of typeface.

Load your fountain pen with ink

Your pen needs ink, so load it up and make sure you don’t run out. The Sheaffer Viewpoint Calligraphy Fountain Pen is a great way to remove this risk, as it has a built-in window to show the remaining ink level. 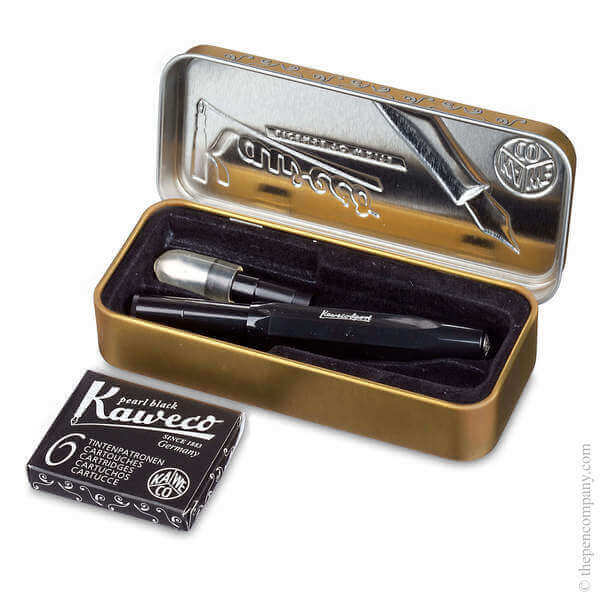 Practise some basic strokes with your fountain pen

Familiarise yourself with the main features of the calligraphy font you are using. Practise line length, stroke weight, the connecting lines between letters, and decorative elements like serifs and tails. Once you’re confident, you’re ready to ink your final draft.

Go over your draft with your fountain pen

Ink carefully. Take your time, but be confident as you’ll get smoother strokes that way. You could start by using an extra-fine fountain pen nib to ink over the pencil, before adding the thicker strokes.

Calligraphy is extra challenging for left-handed people, and to avoid smudging, you might want to work right-to-left across your draft. This will also ensure you are drawing the pen nib across the page, rather than pushing it with the risk of tearing the paper.

What are the best fountain pens for calligraphy?

We’ve mentioned some of the best fountain pens for calligraphy already:

Ultimately, the best fountain pen for calligraphy is the one that feels right in your hand and gives you the best results. Because of this, any good quality fountain pen should give you the tools you need to start learning this enduringly beautiful craft.

From a young age, Natalya has been interested in all kind of stationery. From owning an assortment of coloured pens and pencils to buying a new notebook to write in every week. Natalya loves working for The Pen Company as it aids her in continuing her stationery passion as an adult.

How to use Tombow brush pens for hand lettering
‘Lettering’ is an umbrella term, used when talking about anything…
Categories
Visit our shop
Archives