If there is something like a ‘most iconic’ pen shape out there, it is certainly the ‘cigar’ shape. And few pen manufacturers execute the ‘cigar’ in the excellence and variety in which Sailor does.

The Sailor 1911 Ringless is technically a 1911L, just without some of the adornments that the 1911L has – such as the cap band. This gives the pen an overall much cleaner and more minimalist aesthetic. Plus there’s something a little extra, but I’ll return to that in a little while.

The pen under scrutiny here is the “1911L Simply Black RT FP 21k (F)”. Less abbreviated, this means the Ringless fountain pen version of the 1911L, with rhodium trim and a 21-carat gold nib in fine. 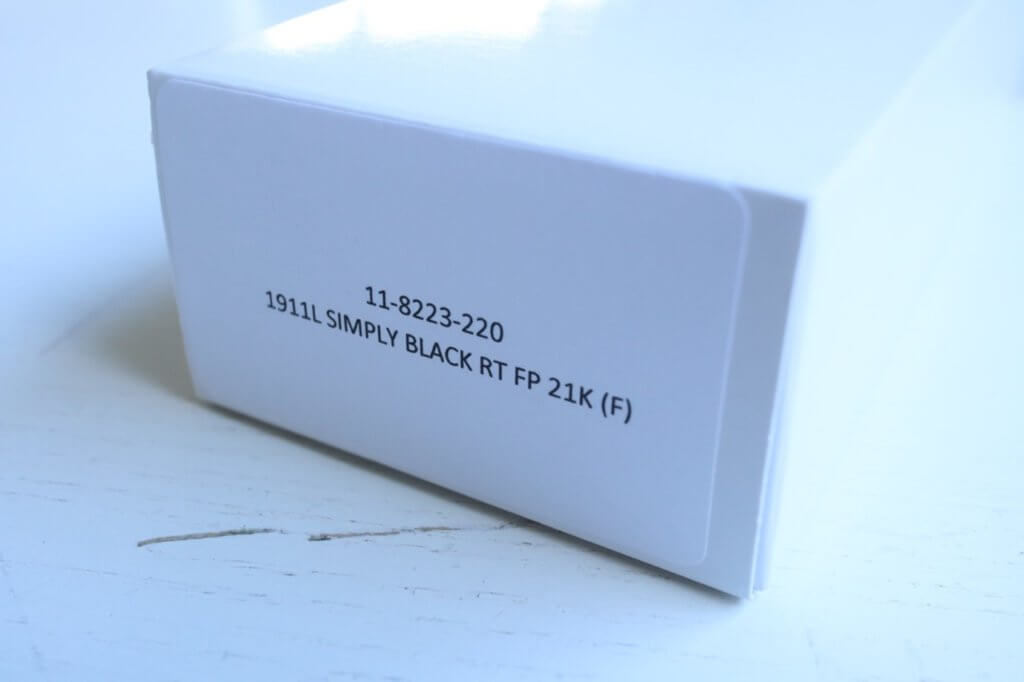 The Sailor 1911 Ringless fountain pen comes in a simple white cardboard sleeve with a central cutout, which is so characteristic for Sailor, as it exposes the company logo that is printed on the box inside the cardboard sleeve. No surprises here, but lots of consistency – Sailor is generally very consistent. 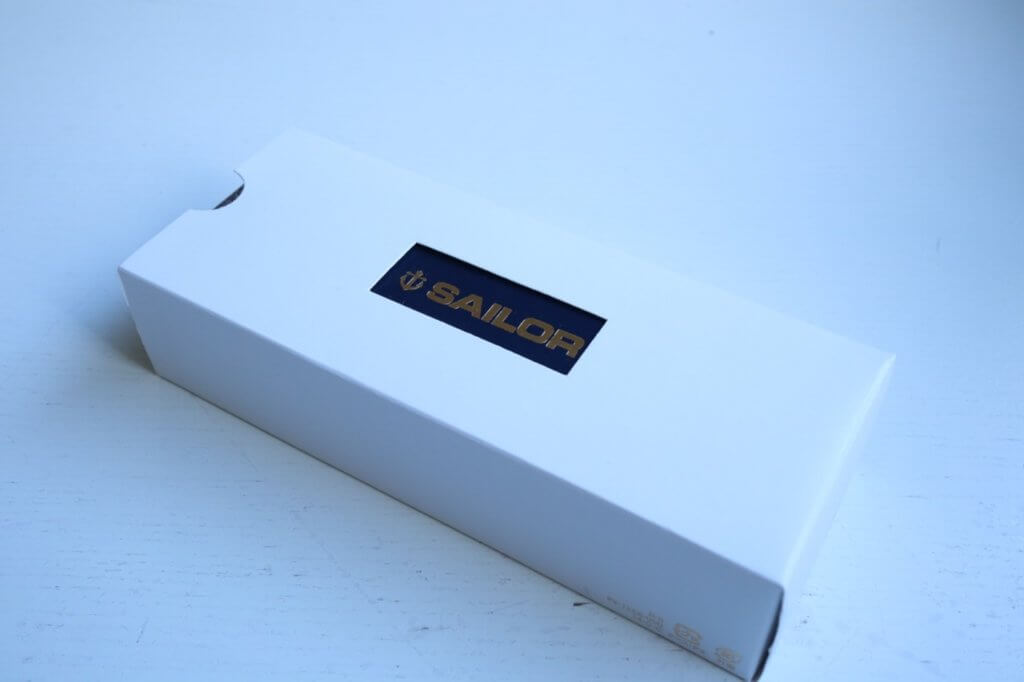 Sliding out and opening up that inner box reveals its contents: the pen, an instruction manual and – very usefully – Sailor’s proprietary piston ink converter.

This is, by the way, something to look out for when purchasing a non-piston filling fountain pen. You don’t want to get your brand new pen home and then have to order and wait for a converter for days on end, as the regular ‘standard international’ ink cartridges that you might have floating around your ink drawer will not do the trick here. 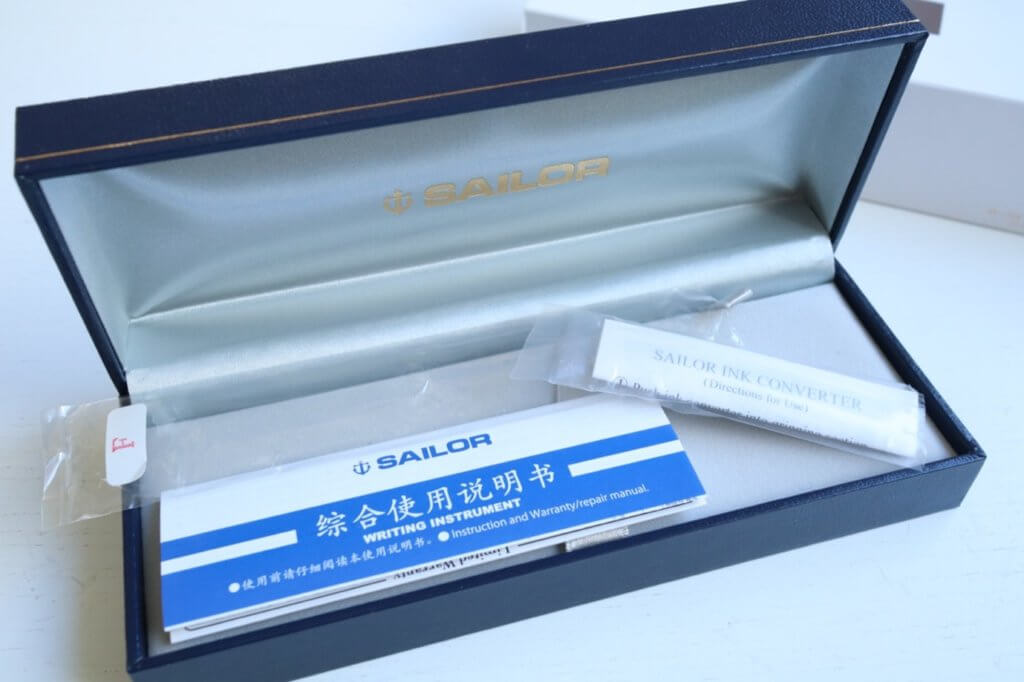 Sliding it out of its protective transparent sleeve reveals the subtle beauty of the pen in all its classic simplicity: a very minimalist cigar shape without any bells and whistles. It won’t get more understated than that.

This piece of Japanese perfection and craftsmanship won’t allow your attention and that of those in a meeting with you to go anywhere else than the conversation and notes to be taken, as they unfold in the present moment.

And here comes the little extra, as promised at the beginning of this write-up: the ‘ringlessness’ of this version of the 1911L does nod its head subtly, but very clearly, in the direction of its bigger brother — Sailor’s flagship pen model, the ‘King of Pen’ (KOP).

Of course, this version is still slightly smaller, with a slightly smaller nib than the KOP, and it also isn’t coated in Urushi fanciness. Nevertheless, it is very much KOP reminiscent, executed in sheer excellence, and at a fraction of the price. But this is a secret tip between us right here. Promise not to tell anyone! 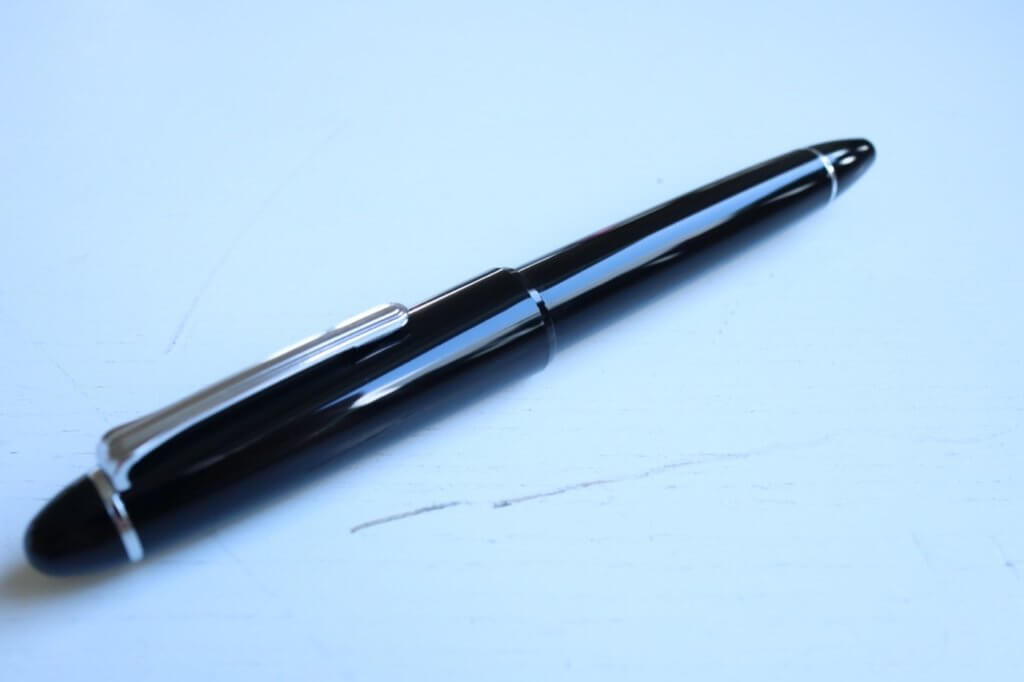 Unscrewing the glossy black body of the pen (finished in a way that does not expose fingerprints much) reveals the converter to be filled with ink. And here comes another little secret not everyone is aware of, and one that once more points to Sailor’s excellence in execution: to fill the pen with ink, you won’t have to submerge the whole section below ink level.

Unlike most other pen manufacturers out there, which have the filling hole sitting right at the bottom of the section, Sailor pens fill through the breather hole that sits atop the nib. This means that submerging the nib about halfway, just above the breather hole, will do the job. Not only does this allow you to fill from much shallower ink levels in a bottle, but it also means goodbye to inky fingers from wiping residue off the section. 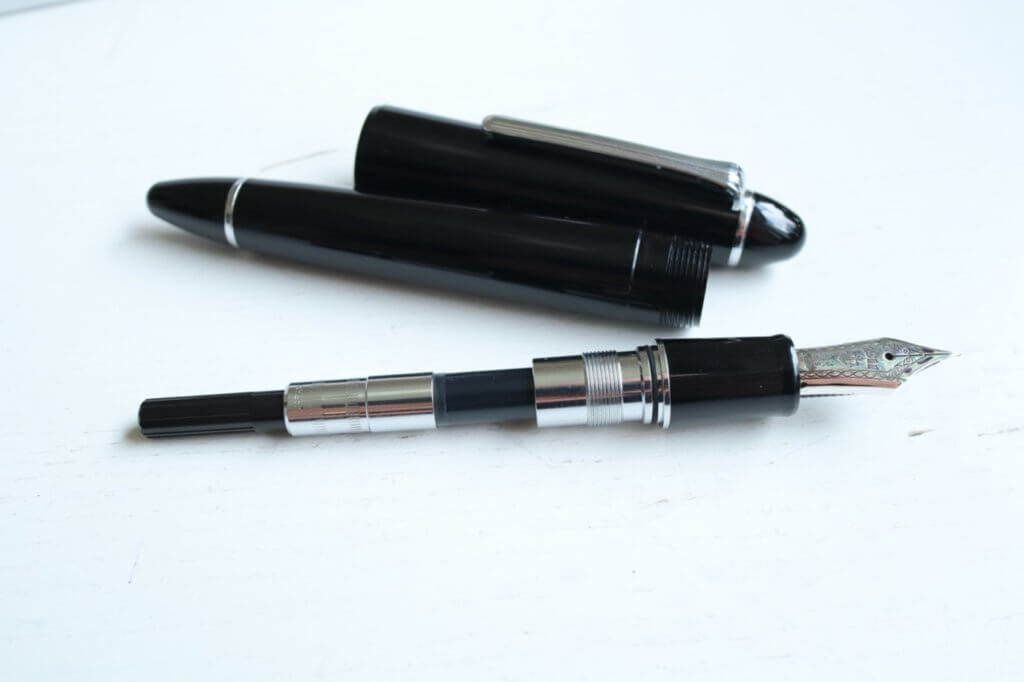 Speaking of the section, the Sailor 1911L section is just right for medium to larger-sized hands — being roughly comparable to a Montblanc 146, a Lamy 2000 at its widest grip, or a Pelikan M600.

If in doubt, and as a rule of thumb, a wider grip section is always preferential to a narrower one; the former will help to relax your grip, while the latter might cause cramping as your fingers tend to cling onto the pen.

Of course, the star of the show is the business end of the pen: the nib. Especially when it comes to Sailor, which is very well known for producing some of the – if not the – best fountain pen nibs available.

The Ringless sports a 21-carat gold nib, with Sailor being the only manufacturer today that produces nibs of this carat (others commonly offer 14k and 18k). The nib is extremely smooth and exhibits the very characteristic pencil-like ‘Sailor feedback’ — a writing experience like no other.

If you are looking for the ‘warm-butter-across-glass’ writing experience with zero friction to it, this nib is not for you. But if you appreciate really feeling the writing, and getting that feedback from the paper, then this nib is right up your alley.

With Sailor being a Japanese pen brand, a general nib-conversion rule applies: Japanese nib designations tend to run about one width narrower than their Western counterparts. Meaning, as this F (fine) nib is a ‘Japanese fine’, it produces a very fine line that is much comparable to any Western EF (extra fine) nib. 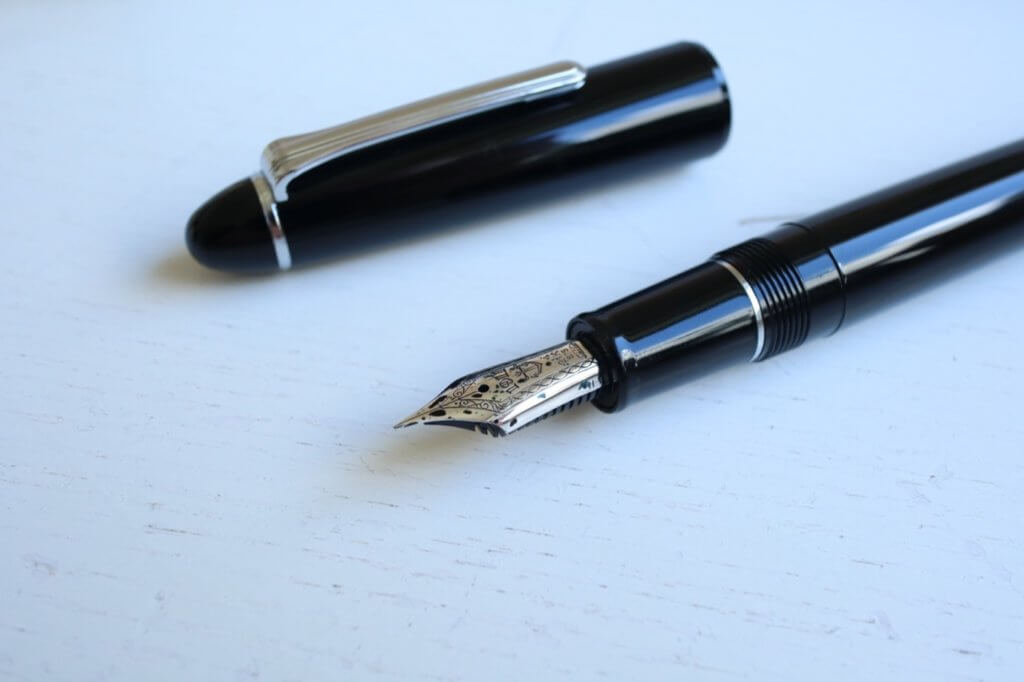 In medium to larger-sized hands, the pen rests very well and is balanced when unposted. 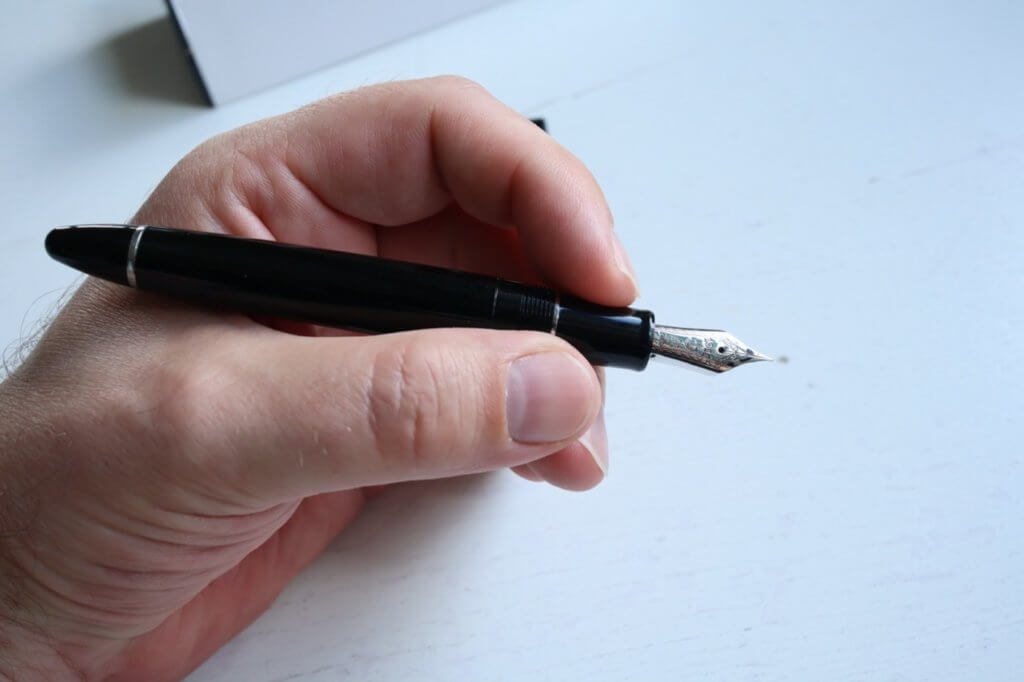 The pen also balances when posted. An interesting observation is that posting the pen significantly increases the pencil-like feedback you will feel from the pen on the paper. So, this is a good way to also adjust the pen to your liking. If you wish for less of the feedback, write with the pen unposted; if you like more of that feedback, just post the cap. 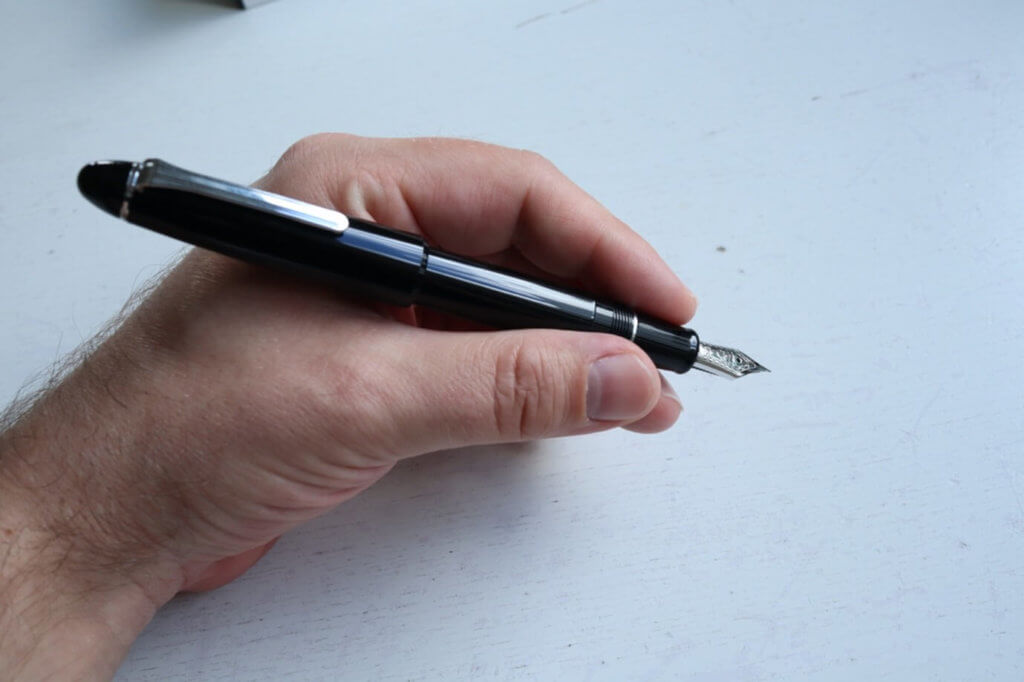 Overall, the Sailor 1911L Ringless is not an inexpensive pen, but it is great value for the money. What you will get is a sleek and minimalist pen that is built like a tank and offers one of the most exquisite performances out there.

Among collectors, there goes the saying that no collection is complete without at least one Sailor in it. Certainly, you have not experienced the full spectrum of what fountain pens are able to offer in terms of writing experience without having at least held one in your hand and tried it out for yourself!

You can purchase the Sailor 1911 Ringless fountain pen here and view more of my reviews here.

Pelikan Pura (EF) Fountain Pen Review
My ancestry is 50% German, which may explain why I’m…