The Pilot Capless Matte fountain pen (aka Vanishing Point) is very interesting in many ways. First of all, it is one of the very few – if not the only, good and widely available – retractable fountain pens on the market, which means that the pen combines the comfort of a fountain pen with the ease of use of a ballpoint pen. Secondly, the Capless comes in an almost unimaginable variety of colours and finishes – not all of which are available in Europe, though. Last but not least, the pen has an iconic design that makes it stand out from the crowd.

The design aspect already shows in the packaging. The pen comes in a pretty futuristic looking black/transparent acrylic box that will then swing open, revealing the pen sitting there like the pilot (pun intended) of a spaceship on the command bridge. 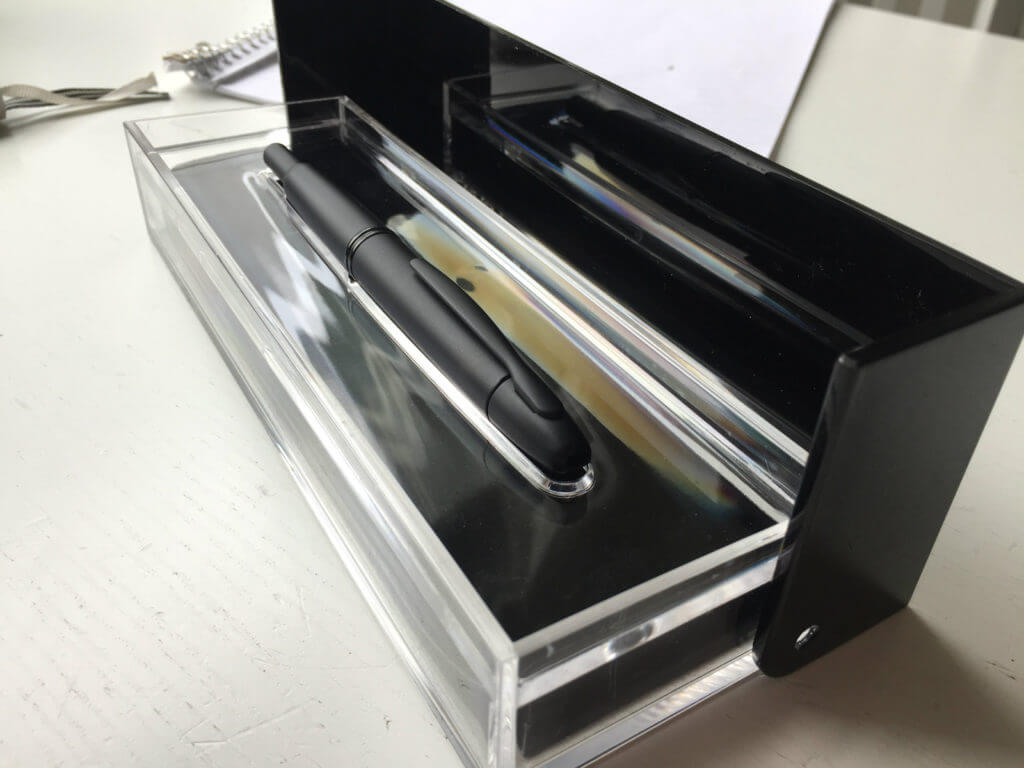 Taking the pen out of its seat, the very first impression is of it’s solid built quality and nice weight in the hand, which gives it a premium feel. The particular pen we are looking at here is the so-called “Matte Black” finish, that gives the pen a stealthy and understated appearance. The only parts that stand out from the satiny feeling matte surface are a grey “PILOT JAPAN” logo and two glossy black rings – which is where the pen can be screwed apart in order to access inside and refill it. 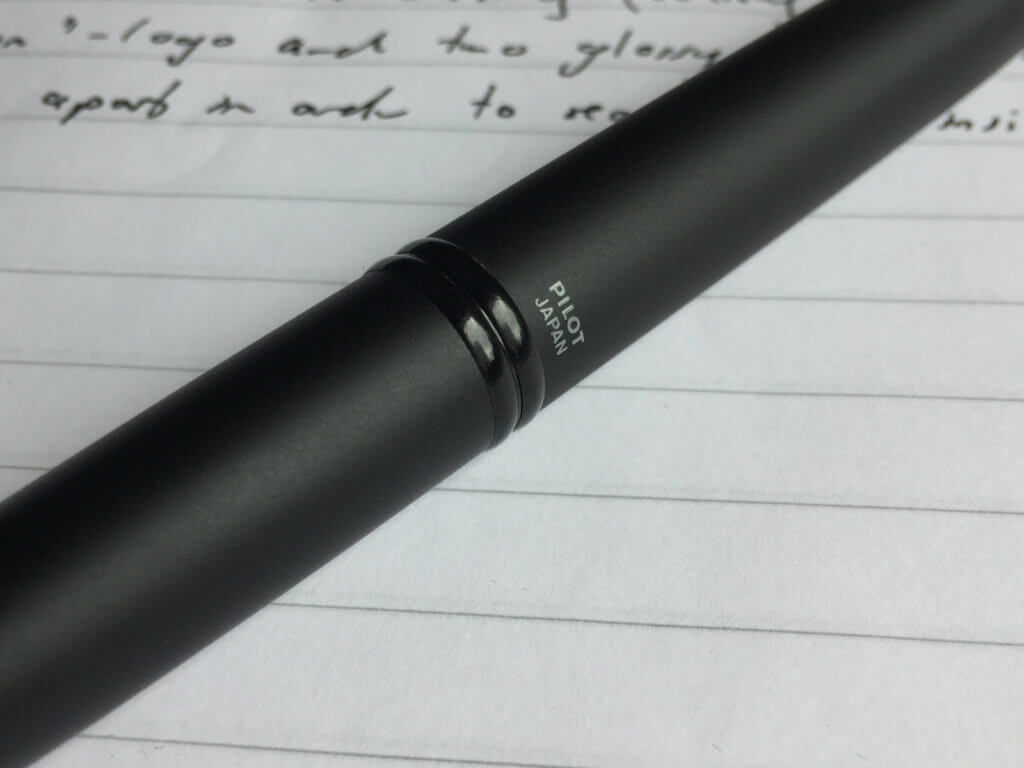 Looking at the rest of the pen, we have a convenient clip on one side that allows for carrying the pen nib-up in a pen case or shirt pocket, and the click mechanism to push out the nib on the other side. 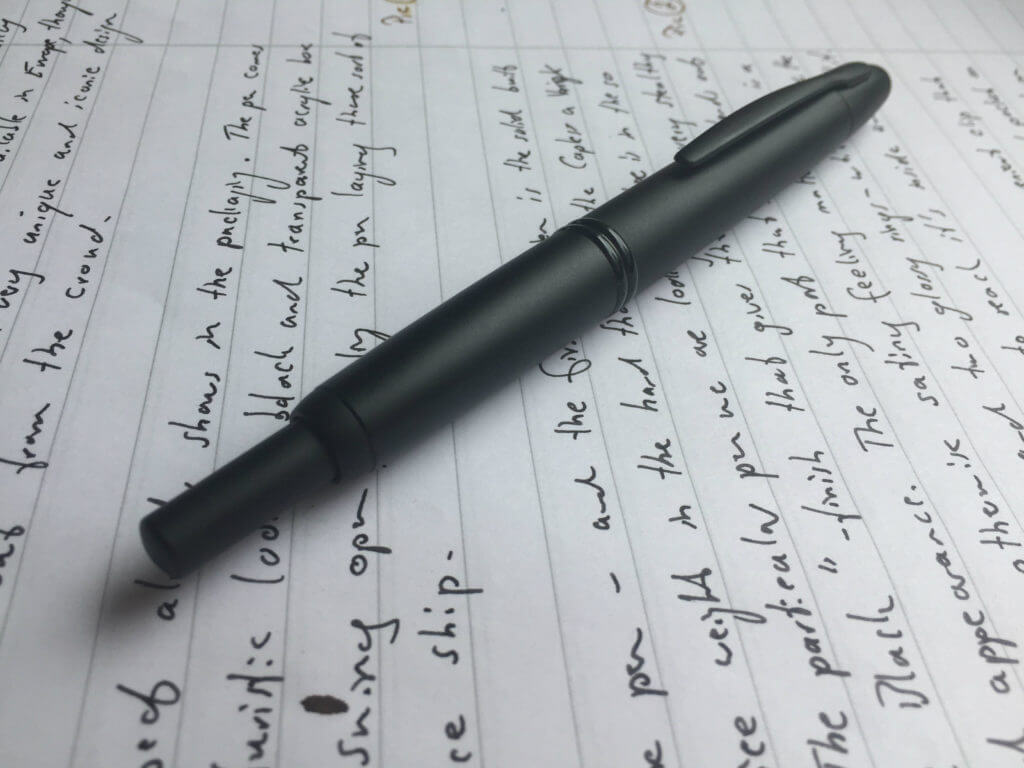 On to the most interesting part; a push onto the click mechanism at the back of the pen will expose the 18k gold nib with rhodium-plating, which is available in Fine, Medium, and Broad. Fine is what we are looking at here. 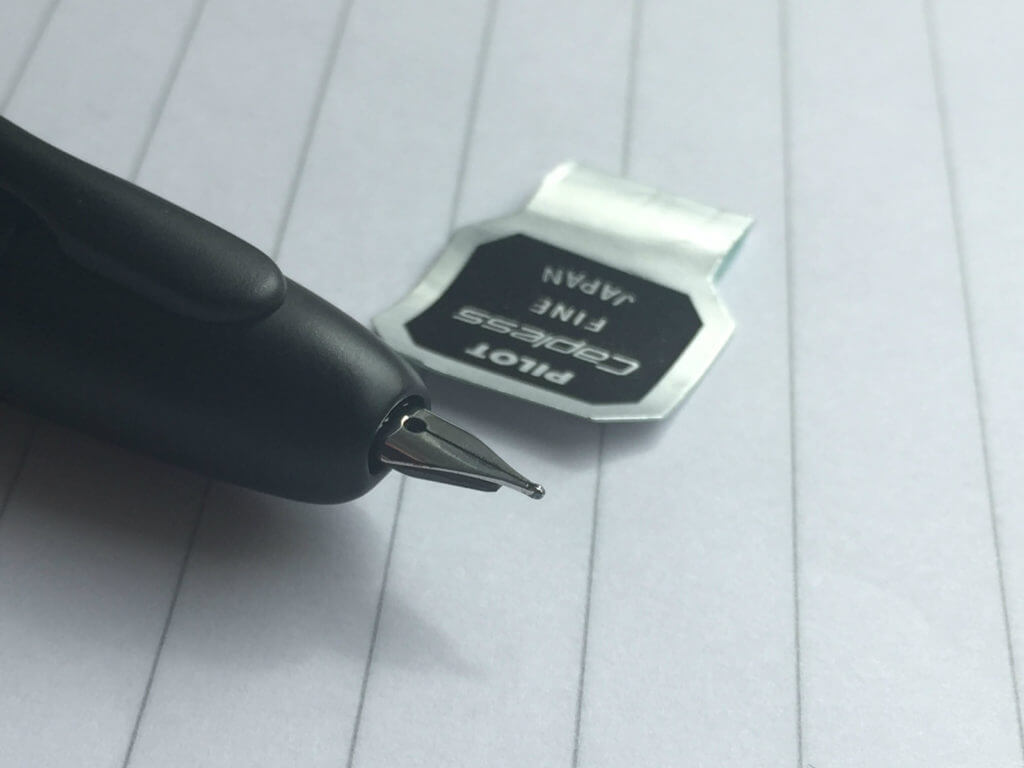 The click mechanism works very well and has enough resistance to it as to not push out the nib by accident in a shirt pocket or so. Upon pushing the button, a little mechanism inside the ‘head’ of the pen will shift down and allow the nib out. When retracted, this closure will prevent the nib from drying out as well as preventing dust and other particles from getting inside the pen – both of which have never occurred to me in weeks of usage. The Fine gold nib writes very pleasantly. It is smooth with a slight ‘pencil-ish’ feedback that lets you know that you are actually writing. The line it lays down is precise and consistent. The ink flow is certainly not dry, but also not overly wet. It’s just right there, smack bang in the middle. Being a Japanese pen, and with Japanese nibs mostly running on the finer side of things, this Fine will write like a Western Extra Fine.

Being a lefty, the only thing that I have to be a little conscious of is my grip. My natural tripod-grip has a tendency of wanting to place my index finger right where the clip is on the Capless. After a bit of getting used to, it really is just a matter of sliding that rebellious finger back down, placing it beside the clip instead of on it. As a right-handed person, you will most likely grab the pen slightly different and will not even notice the clip potentially being in the way. Anyway, since the clip is positioned where other pen-sections have nothing but the section itself, it may be a good idea to double-check and evaluate your own grip before committing to a Capless. 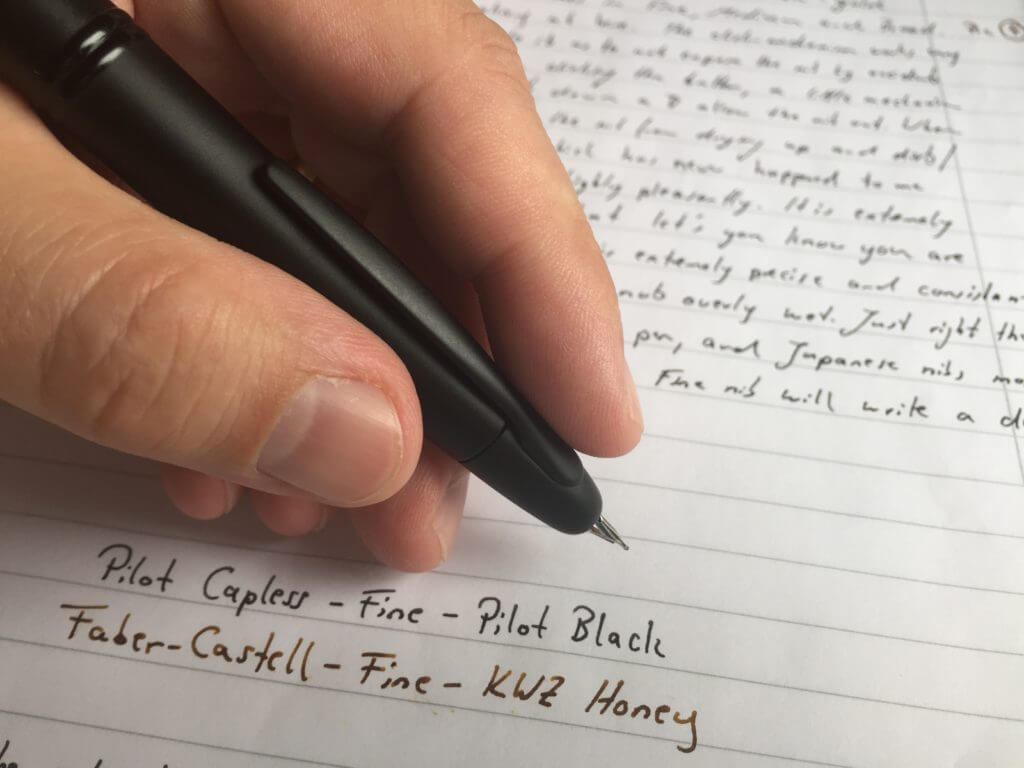 In order to refill the pen, it is screwed apart in the middle. You then take out its whole inner workings, in which you can either insert the Con-40 converter that comes with the pen or the proprietary Pilot cartridges. It will be the exposed inner workings that will be submerged into ink in order to fill up the pen. This works very well, however the converter does hold very little ink. So I prefer to use the cartridges that do hold about double the amount of ink – and refill those with a syringe in case I would like to use bottled ink. You will notice a small silver cap coming with the pen, of which I personally did not know what to do with in the beginning. A little research on the interwebs revealed that this is actually to be put onto the inserted ink cartridge in order to prevent the cartridges’ plastic material from being worn down by the inner click mechanism in the course of repeated exposure/retraction of the nib. 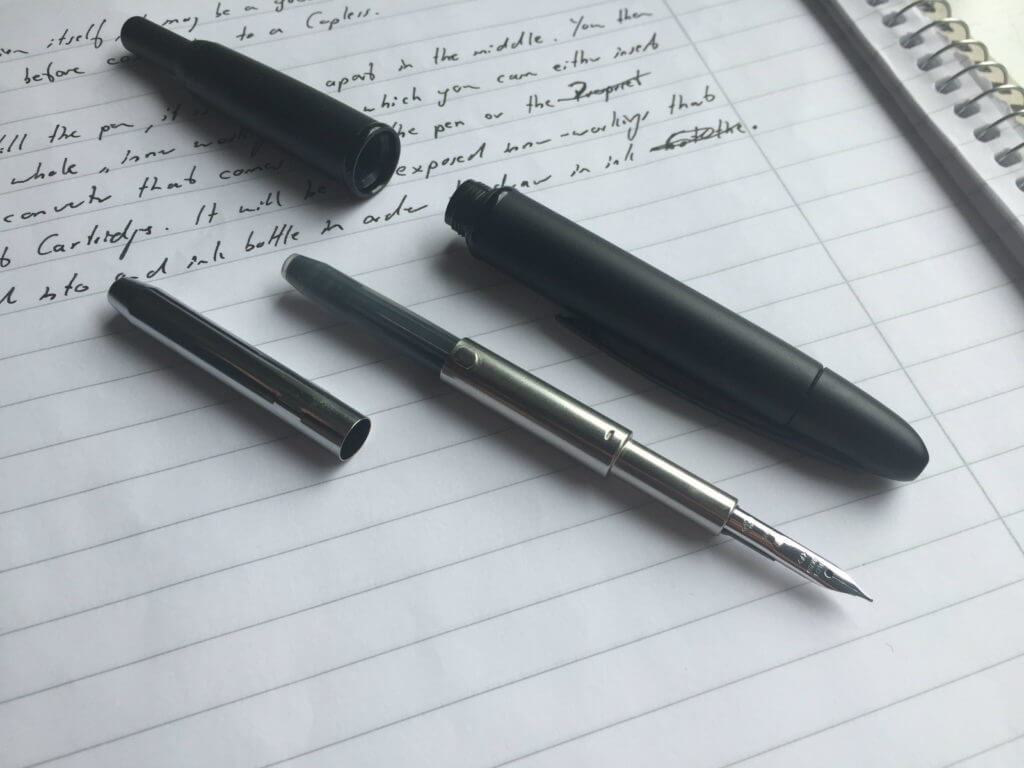 To conclude, we may say that the Pilot Capless is not exactly an inexpensive pen, of course. What makes it worth the price though, is its awesome design with Japanese attentiveness to detail as well as the built quality and 18k gold nib, in combination with the unique click mechanism that makes the pen an excellent note-taker in many everyday work and school setting alike. It is a favourite fountain pen of many enthusiasts. I am no exception, and the Capless has conquered a safe place in my everyday pen repertoire. I rarely find this pen un-inked. 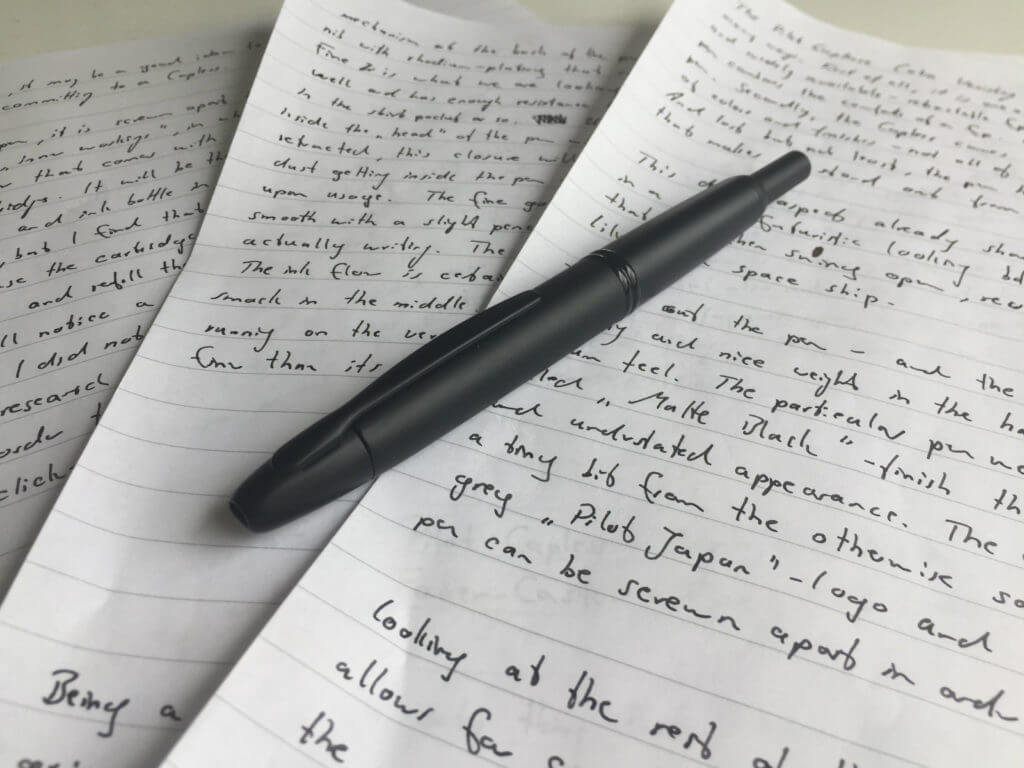 To wrap it up, here is a final shot of the pen beside a Lamy 2000 for size reference. The latter is basically shorter only because of the click-mechanism. The section diameter is rather comparable, i.e. if you do not hold your 2k almost down at the nib. 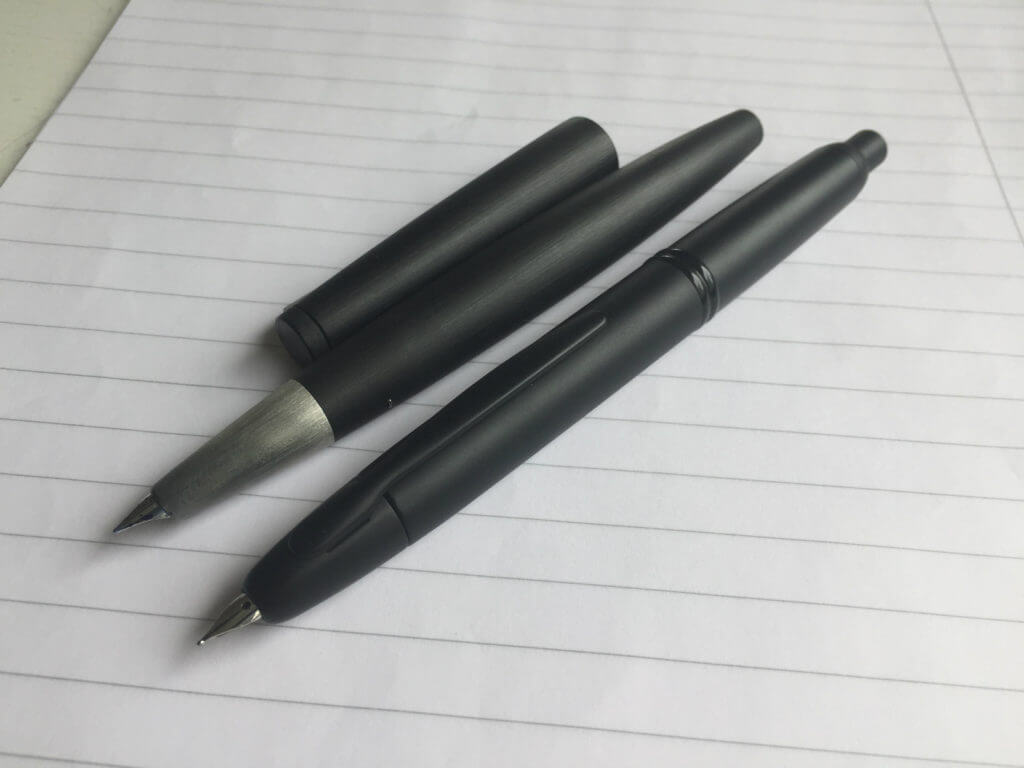 Our German fountain pen range
On the whole, German writing instruments are revered for…

Why you should try a fountain pen
The first Friday of every November is Fountain Pen Day,…
There are 2 comments for this article