Today: a look at Lamy’s AL-Star mechanical pencil. The AL-Star series of pens was released in 1997 and was created by Wolfgang Fabian, the same designer who came up with the fantastic Lamy Safari.

I was a fairly early user of the Lamy Safari – I’ve been using Safari fountain pens since the mid 1980s. However, because I have always been happy with the Safari, I have been a quite late adopter of the Lamy AL-Star, which was released in 1997. I had an AL-Star fountain pen for a while, but have only started using the mechanical pencil this week. 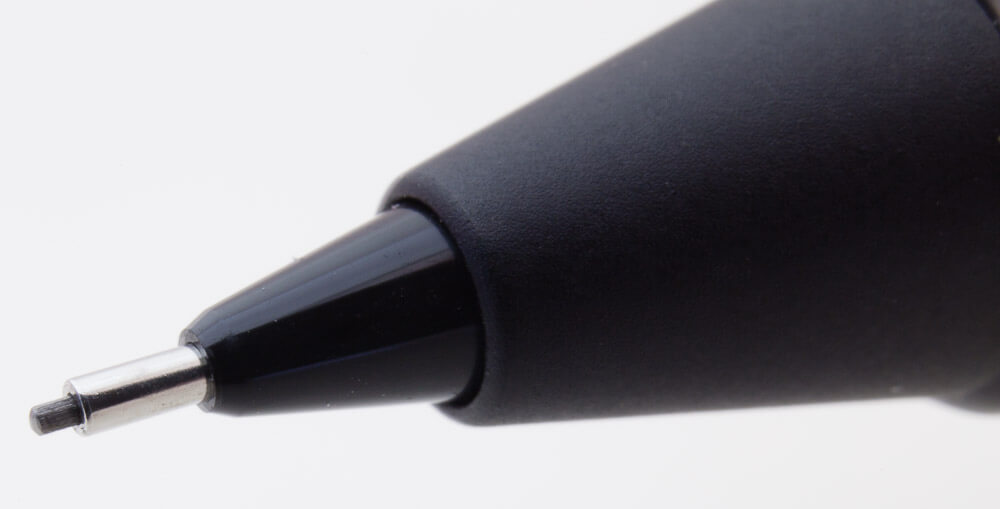 The Safari and AL-Star fountain pens are fairly well known. Their grip sections are round, but have two flat sides – one for thumb, one for index finger – creating a nice shape to hold the grip. I never had any problems with it despite using it many hours a day for a lot of years (when it was my school pen), but I have read on the web that some people don’t find the grip section very comfortable.

Well, the mechanical pencil offers a clever twist. Instead of two flat sides it has three flat sides, making it possible to hold it in three different positions. This makes it possible to rotate the pencil so that the lead can be used more evenly. The main problem to rotating the mechanical pencil is the clip though. When it doesn’t face upwards it will rest on your hand between thumb and index finger. Not everyone might like that, but this is only a problem if you rotate your pencils, and it does bother you.

The AL-Star’s grip sections are transparent

The Safari and AL-Star pencils used to be available in 0.5mm and 0.7mm, but unfortunately Lamy seems to have gotten rid of the 0.5mm version, at least here in the UK. I was lucky to have received The Pen Company’s last 0.5mm version (and this was also the deciding factor for my decision: AL-Star vs Safari).

I noticed that The Pen Company started offering free laser engraving on many pens, including the AL-Star line, so I just had to try this out. Other companies charge quite a bit of money for custom engraving, so I was positively surprised to see free engraving, even on relatively cheap pens, like the AL-Star (the rollerball, mechanical pencil and ballpoint pen are under £16 each) – in fact, I was so happy with the free engraving that I then bought my wife a Lamy Pico with custom engraving too. She had a red Pico – her favourite pen – for many years, bought in a local shop that closed down years ago. Over the years it acquired some scratches, so I thought she might like another one, and IMHO the white one is beautiful. She recently had her PhD ceremony, so I ordered the Pico with her name and new title!

Via email I talked to James from The Pen Company about the engraving process, and he provided me with the following information:

“The engraving process is actually very quick and only takes a few seconds, once the artwork is created.

“Different materials react differently to the laser, some change colour and some are simply obliterated to leave, in some cases, a pretty deep channel.  The anodised surface of your pen has changed to the white colour for one of two reasons; the heat of the laser has caused a physical change to the anodised surface creating the colour change or it has simply removed, or partly removed, the darker anodised surface to reveal the lighter aluminium beneath.

“For most metals it simply cuts a deep(ish) channel, stainless steel reacts very well in this way, as does “natural” untreated aluminium.  Most of the time we tend to use a lower power setting particularly on plated or anodised surfaces either to avoid cutting all the way through the plating (you don’t necessarily want to see brass through platinum/rhodium plating) or so we can work the surface several times until we decide the finish looks good without overdoing it.”

A close up of the engraving. You can just about make out the dots that make up the letters.

The AL-Star mechanical pencil is a great pencil. It is a shame that there aren’t as many colours available for the pencil as there are for the pens from the rest of the series. It is also sad that Lamy has stopped offering the 0.5mm version (at least in Europe).

I guess technically this is a sliding sleeve pencil: the sleeve can slide back if you try hard, but while the Lamy Logo’s sliding sleeve mechanism works fairly well the AL-Star’s doesn’t and wasn’t intended to be. The good news here is that even though the sleeve doesn’t slide while you write, you can retract the sleeve to make the AL-Star more pocket friendly.

I would like to thank The Pen Company for providing this pen free of charge so that I can review it.

Why I use wooden pencils (though I still love my fountain pens)
Don’t get me wrong, I love pens. When I was…