To celebrate National Stationery Week here in the UK we are giving away three Fisher Bullet Space Pens.

There is no need to make a purchase – the competition is free to enter. 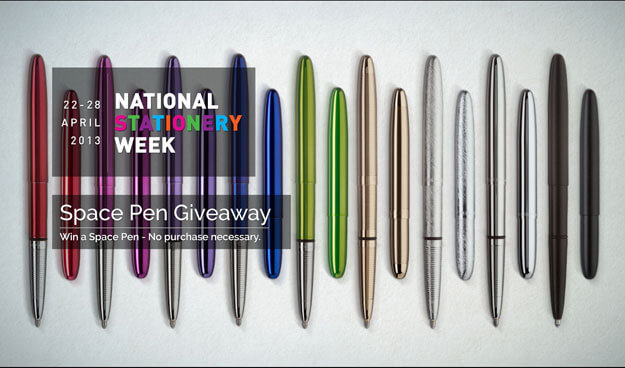 The prize will be your choice of colour of one ‘standard’ finish or one lacquered finish Fisher Bullet Space pen as pictured.

The Fisher Bullet Space Pen is a superb instrument and an office favourite at The Pen Company. It has won numerous awards and is displayed at the Museum of Modern Art, New York as an example of excellent industrial design. The Fisher Bullet Space Pen utilises the Fisher pressurised refill, originally developed in conjunction with NASA and used in the American space programme. These pens are ultra-reliable and smooth writing, will write over difficult surfaces and also upside down, particularly useful for doing crosswords in bed!

You can enter in three ways:

1. Visit our Facebook page and “Like” us before the end of National Stationery Week – Midnight, Sunday 28th April.  One “like” will be randomly chosen to win one pen. Check back here on Monday 29th April to see if you’ve won.

One Tweet containing this hash tag will be randomly chosen to win one pen. Don’t forget to follow us to find out if you’ve won!

The competition is open to all – we will post your prize outside the UK if that is where you live!

Winners will be announced on Monday 29th April, please check back to make sure you claim your prize!

The decision of The Pen Company is final and no correspondence will be entered into. There is no cash equivalent prize offered. By entering the competition you are bound by these rules.

Win a Faber-Castell or Sheaffer Pen every day of National Stationery Week 2014
Free to Enter – no purchase necessary! We have 4…

Faber-Castell Grip & Sheaffer VFM Prize Draw – Day 6.
To enter for the day 6 prize draw to win…
There are 114 comments for this article