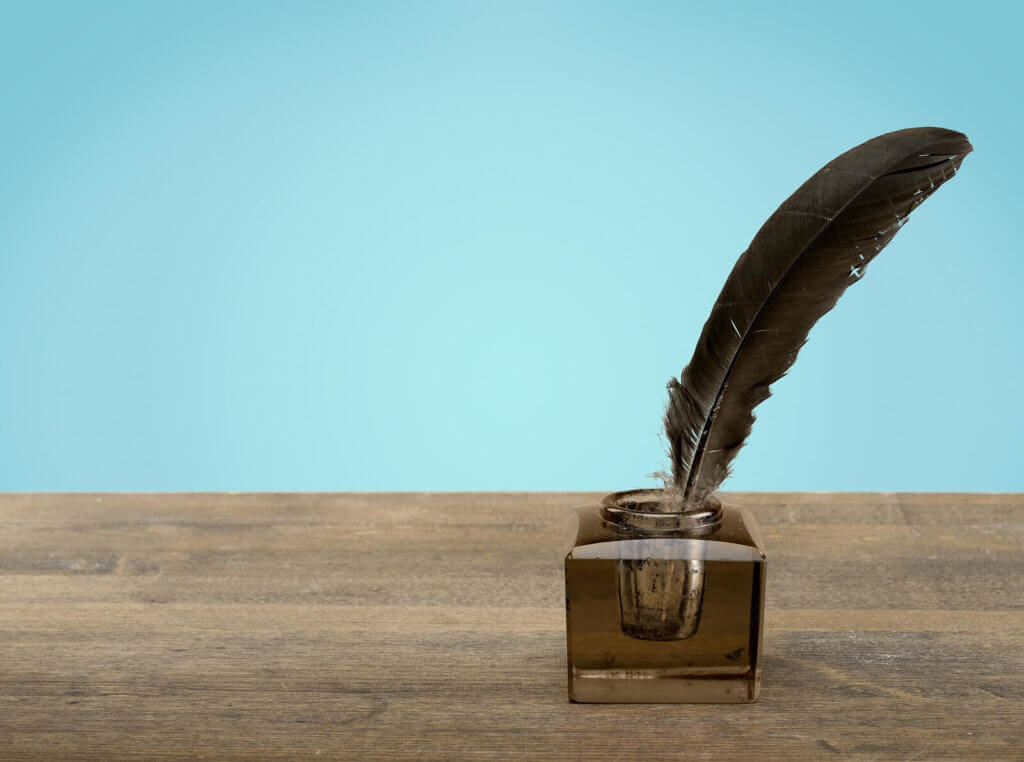 The quill was an early writing tool — one that was easy to make and fun to use (for shorter texts, anyway). For those reasons, we decided to dedicate this blog post to quills — sharing exactly what they are and how to construct your own at home.

What is a quill pen?

A quill pen is a writing implement crafted from a bird’s wing feather. Popular feather choices at the time of the quill included swan, goose, and turkey — large birds offered large feathers and, therefore, a better quill.

The exact dates of the quill’s popularity aren’t known; however, the Dead Sea Scrolls were partly written with a feather quill pen in 2 BC (known at the time as the Year of the Consulship of Augustus and Silvanus).

By the 15th century, the quill pen’s popularity was soaring in the western world, and quills remained in favour until the 19th century and the introduction of the fountain pen.

That’s not to say that feather quill pens are entirely retired from use in the modern world, though; they can still be found in the U.S. Supreme Court every time it is in session.

Interestingly, quills are used as standard in the fictional wizarding world of the Harry Potter books and movies (with Muggles using pens and pencils instead). Featured are peacock feather quills, eagle feather quills, and pheasant feather quills.

Some of the feather quills in the Harry Potter series are enhanced with magical properties — including auto-answer quills, which are banned during written exams, and anti-cheating quills, which are mandatory in exam conditions.

If you have spotted more quills in the Harry Potter series, let us know in the comments below.

How to make a feather quill pen 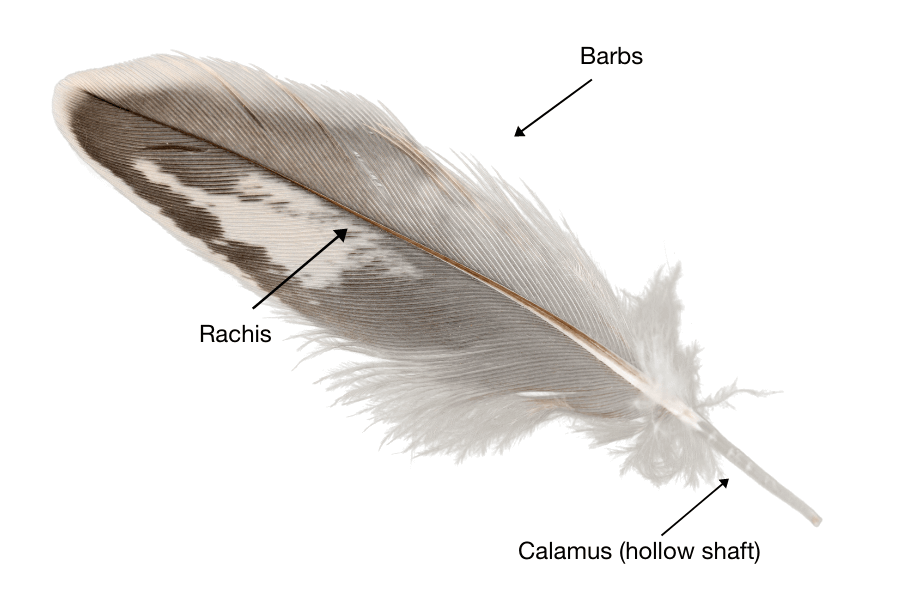 The anatomy of a feather

After learning more about them, you may now be wanting to know how to make a feather quill pen of your own. You’ll be pleased to hear that it is straightforward — just follow the steps below.

There are several ways to source a feather for this project. If you happen to own a large bird yourself, you can collect a dropped feather.

Alternatively, you can head to somewhere where large birds are kept and procure a feather from the floor there.

If you buy a feather online, please make sure it was shed naturally, as methods of feather extraction can be very cruel.

Even if your feather looks clean, it can harbour bacteria, so give it a good wash and scrub with soapy water and a toothbrush.

Don’t worry about damaging the feather — they are stronger than you think.

Leave it to dry, and the original fluffy appearance will return. 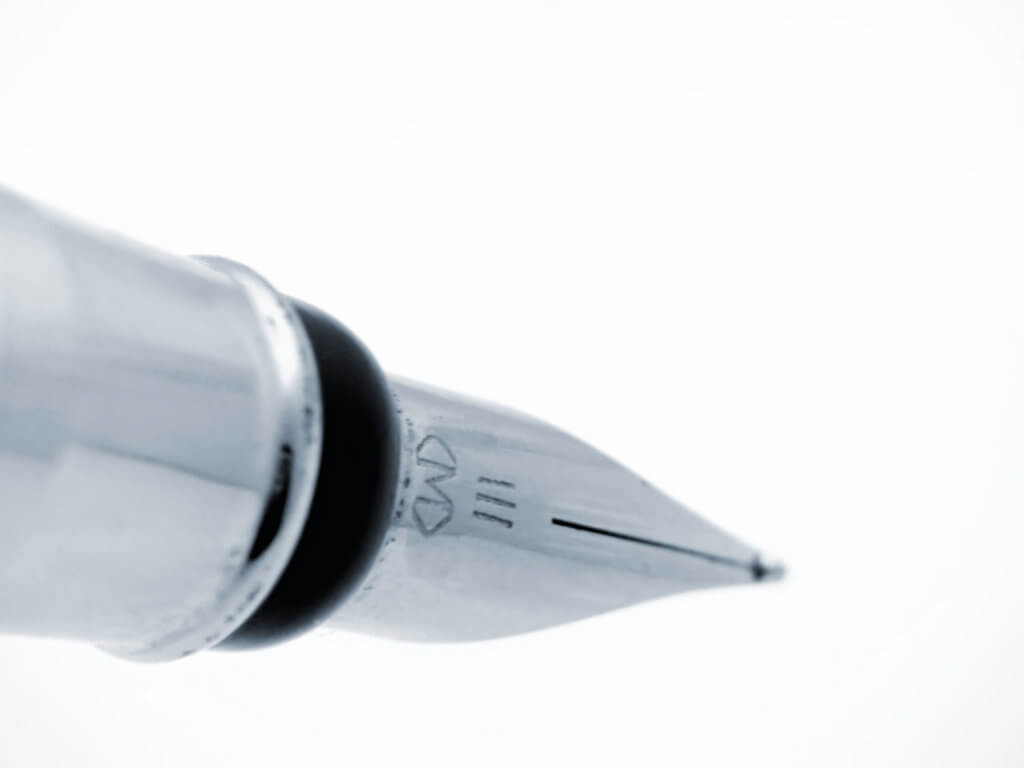 When discussing how to cut a quill pen’s nib, it’s worth noting here that a feather’s calamus (hollow shaft) is incredibly strong and curved and therefore difficult to cut.

Soaking the tip of the calamus in water overnight may help soften it a little, but it will still be difficult.

Firstly, you need to cut the very end of the calamus off neatly to create a fresh end to work with. Do this carefully, as the hollow shaft can easily split and will then be of no use as a quill.

Next, hold your feather like you would a pen and mark the end of the shaft up with a nib shape — just like a fountain pen nib.

Using a very sharp craft knife and a cutting mat, carefully cut small sections off the calamus at a time to avoid causing unwanted damage.

Once you have a nib shape you are happy with, make the final cut — a slit up the middle of the nib, which will create two tines.

Your quill pen is now ready for use!

How to write with a quill pen and ink

To write with a quill pen and produce enchanting handwriting or calligraphy, dip the nib of your quill into an inkwell of calligraphy ink and hold the quill in your hand like you would a fountain pen.

If you enjoy crafts, you might also enjoy our guide to making amazing stationery in just one hour.

Why is Adult Colouring So Popular?
Mental health awareness has increased in recent years, which is…

12 Amazing Ballpoint Pen Artists
There are many excellent ballpoint pen artists out there, but…